The Little-Told Story of How the U.S. Government Poisoned Alcohol During Prohibition (slate.com). As many as 10,000 people died as a result of the U.S. Government's program of deliberately adulterating alcohol with benzene, acetone, methanol, and other poisons durng the late 1920s and early 1930s. 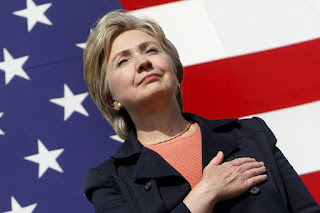 Hillary Clinton: I Will Reveal the Truth about UFOs If I Become America's Next President (mirror.co.uk). Tinfoil-hat caucus, in the bag.

December US New Car Sales "Down, Exceptionally Weak" Says Bloomberg; WSJ Says Up and Strong (globaleconomicanalysis.blogspot.com). And don't forget, VW was virtually taken out of the market during this time frame. Which should've helped Detroit noticeably.

Police Are Solving a Lot Fewer Murder Cases Than They Used To (vox.com). "Police solved more murders in 1995 than even happened in 2014." That's because crime has been going down for decades: 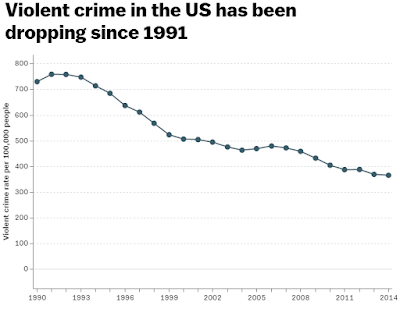 But today, as in decades past, only about 64% of homicides result in an arrest, despite much better technology today.

America’s Incarcerated Population, the Largest in World, Grew Even More Last Year (theintercept.com), interrupting a five-year downward trend. "About one in 36 adults in the United States was under some form of correctional supervision at year-end 2014." That's worth repeating.


About one in 36 adults in the United States was under some form of correctional supervision at year-end 2014.

The Narco-Terror Trap (propublica.org). "The DEA warns that drugs are funding terror. An examination of cases raises questions about whether the agency is stopping threats or staging them." Um, okay. Meanwhile:

91% of Patients Who Survive Opioid Overdose Are Prescribed More Opioids (arstechnica.co.uk). This is the real narco-terror trap, no? Let's review. We have a serious opioid overdose problem (UK and US). We know who the dope providers are (irresponsible doctors). We need to make some arrests now (or else STFU). What's hard about this?

Many See IRS Fines as More Affordable than Health Care (houstonchronicle.com). A non-paywalled version of the New York Times story. Bottom line: IRS fines for not buying an Obamacare policy are (for many people) preferable to the crappy, overpriced, high-deductible disaster insurance offered by private insurers. So we end up penalizing the very people who most need "affordable care."

Will California Actually Force Legislators to Wear Sponsor Patches Like NASCAR Drivers? (vice.com). Don't laugh. It could happen, as a result of California's crazy Proposition system (otherwise known as democracy).

Runaway Inequality Is Ripping Us Apart (truth-out.org) but the owner class isn't about to let things change, so in the meantime, let's read books and articles about the subject. Sarcasm aside: This is actually a very fine interview with author Les Leopold, brimming with unexpected insights, such as: "Wall Street's biggest product is debt. Corporations now are so debt ridden that more than 30 percent of the cost of any item we buy goes to interest payments up and down the supply chain." And: "Jail is America's jobs program." And: "America in large part gave up on social democracy when it drank the Better Business Climate Kool-Aid. We could move toward a more just society and basically eradicate poverty. But that requires that we build a mass movement to take on runaway inequality." Plus great phrases like "military Keynesianism," "financial strip-mining," and the aforementioned "Better Business Climate." This was a far better interview than I was expecting; delightfully informative and thoughtful. Kudos to Mark Karlin at Truth-Out.

Should We Solar Panel the Sahara Desert? (bbc.co.uk). A bunch of experts weigh in. No one questions the insane premise. Why does everything have to revolve around a magic monoculture/all-eggs-in-one-basket ("Manhattan project" style) techno-jihad against planet earth? And BTW, what about asking the Africans (you know, the people who own the territory in question?) first, before discussing it behind their backs? (I love how the underlying assumption is "We Westerners can just agree up front on this grand thing we're going to do, and then get approval from indigenous peoples later.") Never mind that. What about rethinking your lifestyle and restructuring your economic reality in such a way that it doesn't require paving the freakin' Sahara desert with solar panels in the first place? But in any case: Why wouldn't you want to just make the Sahara into a lovely (cactus) garden, say? Aren't plants a much better way to harvest sunlight (and CO2) than solar panels?

The Spectacle of the Scaffold – Foucault, Corporal Punishment, and the Digital Age (bluelabyrinths.com) "Foucault describes a riot which occurred during an execution in Avignon at the end of the 17th century... After a botched hanging, the crowd believed the condemned was being caused unacceptable amounts of pain and misery. As a result, the executioner was severely beaten and the gallows were smashed to pieces. It highlights two important points: incompetent execution as a source of outrage, and the explosive potential of a crowd which witnesses it. We should consider the incidents of police brutality we witness on video today to be precisely that, inept executions, regardless of whether or not lethal force is employed."

How Hackers Could End the Era of Big Data Collection (kernelmag.dailydot.com). "Apple has set up its messaging systems so not even the company is able to decrypt messages sent from one user to another, even if ordered to by law enforcement or intelligence officials." Nice.

How Big Can a Black Hole Grow? (arxiv.org) Andrew King,  University of Leicester: "I show that there is a physical limit to the mass of a black hole, above which it cannot grow through luminous accretion of gas, and so cannot appear as a quasar or active galactic nucleus. The limit is Mmax \simeq 5x10^{10}M_sun for typical parameters, but can reach Mmax \simeq 2.7x10^{11}M_sun in extreme cases (e.g. maximal prograde spin)." If I understand it right (actual paper here), cooling and self-gravity in an accretion disk inevitably favor star formation, if the disk is above a certain size. Also, gravitational instabilities in large disks tend to favor star formation. Therefore there's a limit to how massive a black hole can ever be. (Question for the experts: Does this put a limit on how big a galaxy can be?)

And just for fun:

Britain returns to pretending to work

BRITAIN'S workers have returned to staring purposefully at their screens for eight hours.

Man launches Kickstarter campaign to buy himself a pint

A MAN is hoping to raise enough money to buy himself a pint in Covent Garden.

Also see:
Thanks for visiting. Be sure to check out prior weeks' Water Coolers (see links at right).