If the Apocalypse Comes, Will Anyone Notice?

Not long ago (on 26 November) I ran an excerpt, here, from Gravity's Rainbow, Thomas Pynchon's brilliantly eccentric postmodern classic about the V-2 missile bombing of England in late 1944. I also tweeted about it and mentioned the book in an e-mail to a friend (and looked it up in a Google search once).

On 7 December, I got an e-mail from Amazon with a Subject Heading of "Gravity's Rainbow." The first part of the e-mail looks like this: 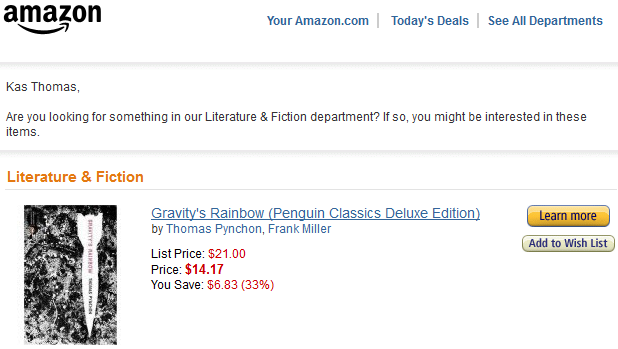 I was startled to see "Gravity's Rainbow" (just those two words) as the Subject of an e-mail from Amazon, although I guess by now I shouldn't have been. (The real question is: Does Amazon know that the copy of Pynchon I'm now reading is from the library?) Google and Amazon have been tracking our behavior, our reading preferences, our buying habits, for quite some time; and they'll only get better at refining their models, perhaps to the point where they can tell I'm about to commit a crime, before I commit it (a la Minority Report). How Pynchon would that be? (Gravity's Rainbow is all about the limits of causation and prediction; it explores the inversion of cause and effect, a theme deriving from the fact that the sound of a V-2 missile's approach is preceded by the actual explosion, due to the missile arriving faster than Mach 1.)

In its almost psychotic paranoia and unrelenting preoccupation with government research into the limits of predictability, much of Philip K. Dick's work anticipates (or does it merely echo, ahead of time?) Pynchon's landmark book—the same way daily news headlines seem to offer a plangent, time-inverted reverberation from some terrible dystopian future whose recent past we now reenact. Perhaps, as I tweeted not long ago, NSA + Google + Amazon are properly considered one entity, the data-ingestion "front end" for the coming dronepocalypse.

I was being completely serious, because today's bizarro reality is so monstrously outrageous (our every reading habit cached in a silicon hash-tree forest, our future purchasing decisions e-mailed to us, but of course we can still opt out of a given purchasing decision should we wish to retain the illusion of free will; even so, you might want to wait, first, for Klout to finish generating your influencers; no sense going off half-cocked, old boy . . .) it would have beggared Pynchon's imagination, even if he was dreaming of Philip K. Dick reading Kafka.

Before you write dystopian fiction, do a reality check. That is to say: Make sure present-day reality doesn't already have you trumped. Broadband Bizarro is streaming live, already. Have you checked your inbox?