Staples: a company in dire need of a Bain Capital Moment 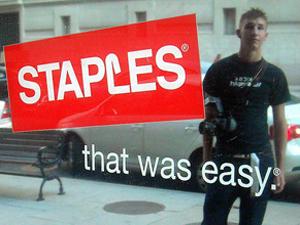 This week would be a good time to hedge any positions you have on SPLS.

The stock could break much higher, or much lower, after its earnings announcement on Weds. 29 Feb.

Short interest on the stock has been running around 26MM shares (three days+ worth of trading). Perfect for a short squeeze if the company reports an upside surprise.

But that would be a surprise indeed.

It will be interesting to follow the puts-vs.-calls volume on the stock for the next two days.

Longterm, I think you can only short this stock down to $8.

To say I'm not bullish on this stock is like saying I don't think toilets flush upwards. They only flush downwards. Unless you're in deep space.

Ironically, Staples owes its existence to the early efforts of Mitt Romney & friends, but is currently in dire need of a Bain Capital moment. The company will only survive if it finds a suitor or new management, IMHO. And I don't think it will be the former.

I'm anxious to hear the 29 Feb earnings call. In particular, I'm anxious to know management's explanation of why stores are eerily empty (quiet as a library, in my neighborhood) and what they will blame their poor results on. Will it be the weak dollar? The high cost of gasoline? The recession? Competition from Amazon? Competition from Office Max?

Oh, I could be way-wrong (short-term). Maybe Staples had a stellar Christmas season and a wonderful start-of-the-school-season. Maybe results won't be nearly as bad as I think they will be. Maybe same-store comps will be up (for the first time in recent memory). Maybe Staples has a wonderful secret that they've not yet shared with the rest of the world.

But you know what? The felt-marker writing, I think, is already on the wall. Staples is (and always has been) a small-business play (and recently, a soccer-mom play). Small business, though, has been decimated by franchise chains over the past 20+ years. Staples' original base of support is all but gone. And the new base of support (soccer moms buying school supplies for their kids) is too thin to support the existing infrastructure. Who wants to drive to Staples to buy inkjet cartridges that you can find cheaper on Amazon (and show up at your door via UPS)?

Not to put too fine a point on it, but: Staples is basically finished, if they still consider small business to be their core customer base.

We'll know the score on Wednesday.

In the meantime, I say: hedge your bets. This one will break big, one direction or the other. And I, for one, don't want to be on the wrong side of the trade.