The year in blogs: Yours Truly @ CMS Watch

I wrote a number of blog posts for CMS Watch this year (40 in all, which is far more than I remember writing, actually; but Google doesn't lie). As a free service to those suffering from chronic insomnia, I hereby offer this consolidated listing of my 2009 CMS Watch blog posts, arranged chronologically. 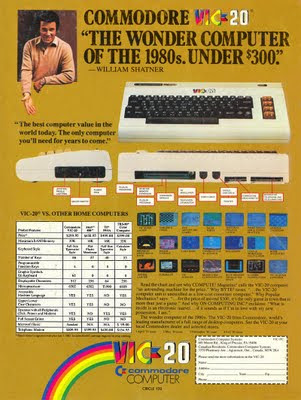 Does anyone else remember the VIC-20? Am I dreaming? Did this $299 consumer appliance (the first "personal computer" to ship a million units) really transform people's lives? Or just mine?

I wonder if William Shatner remembers being in this ad?

Commodore's computer-in-a-keyboard, you may recall, came with a grand total of 5 KB of RAM (enough to run the operating system and leave 3583 bytes left over for you, the discerning consumer, to play with). Fear not, though: RAM was expandable up to 40 KB with an add-on memory cartridge.

Does anyone else recall logging onto CompuServe with a 300-baud modem, using the VIC-20 wired to a TV as a monitor? Or am I showing my age?

On second thought, don't answer that.

I've been trying to follow the fast-moving world of NoSQL lately, and -- like a visit to the carnival funhouse -- it has left me with double vision, queasy stomach, and a staggering gait. (And it's not even Saturday morning...) Yet I find myself coming back for more.

If you're new to NoSQL, you'll want to do a bit of background reading. I'll keep this quick and limit my recommendations to just the essentials:

1. The Amazon Dynamo paper is classic. Almost everyone in the NoSQL world has read this paper.

3. Werner Vogels's "Eventually Consistent" (originally published in ACM Queue) is absolutely the one article you should read if you're not clear on the rationale behind "eventual consistency."

5. The slideshows from the June 11, 2009 NoSQL meetup in SFO bring to mind adjectives like classic, influential, seminal, pivotal, memorable. Ignore these decks at your peril.

6. SQL Databases Don't Scale is short, basic, and to-the-point. Essential background info if you're not already a battle-scarred DBA with scalability wounds.

7. For a tabular overview of major distributed databases and how they compare with each other, see NoSQL Ecosystem by Jonathan Ellis. A similar effort is the Quick Reference to Alternative data storages page. Ellis's post is noteworthy for its clueful, concise, helpful narrative (in addition to the tables). The Quick Reference page is mainly tables -- but the tables are more complete than Ellis's.

http://nosql-databases.org/ -- This site bills itself as "Your Ultimate Guide to the Non-Relational Universe!", and also self-assuredly calls itself "the biggest nosql link archiv in the web." It's worth knowing about, certainly.

That SHOULD be enough to get you started. ;)
Posted by Kas Thomas at 12:01 PM

A quick check of Google Trends shows that Apache Solr (the search server based on Lucene) and Hadoop (the open-source implementation of MapReduce) are popular query terms -- and becoming more popular by the day. (For links to the news stories labelled with flags 'A', 'B', 'C', etc., go to this Google Trends page.)

Bottom line? If you're a developer, enrichening your Hadoop and/or Lucene+Solr skills can only be considered a good investment.
Posted by Kas Thomas at 9:22 AM

The Los Angeles Times story about Google deprecating Gears in favor of "HTML5" got quite a bit of attention in the Twitterverse yesterday, and has the blogosphere abuzz now, as well.

There are several interesting aspects to the story. One is that the name Microsoft doesn't come up at all. Instead, Apple figures rather prominently in the Times story. In fact, the Times's depiction of Google, Apple, and W3C deciding the fate of the post-2.0 Web evokes images of the Big Three debating Europe's postwar reorganization at the Yalta Conference. One gets the (fanciful) impression that Microsoft's future is, to some extent, being decided without anyone from Redmond being present. Of course, that's not quite true. ;)

Another interesting aspect of the Times story is that it talks about HTML5 wrapping the various technologies that will (ostensibly, soon) make Gears superfluous, when technically speaking, many of the functionalities being attributed to HTML5 in the Times story are, in fact, not part of the HTML5 specification at all. They are part of various other WebApps Working Group specs.

Be that as it may, the decision facing the browser-makers at this point is what kind of offline storage to use for browser-mediated web apps. Specifically, will the underlying store support SQL, or not?

This is (trust me) a Huge Hairy Issue -- HHI(tm) -- and don't let the Times or anybody else tell you otherwise: It's far from being settled yet.

HTML5 talks about SQL quite openly. And it appears Opera, Safari, and (soon) Chrome are implementing WebDB, which is a SQL database in the spirit of the (emerging) Web SQL Database spec. But that's not to say WebDB is a traditional SQL database. It implements SQLite, which is another beast entirely.

Know well, though, not everyone wants SQLite -- or SQL, for that matter. In fact, Microsoft's Adrian Bateman has stated that Redmond probably will not go that route. In a WebApp WG teleconference, Bateman said:

WebSimpleDB, also known as the Nikunj proposal (in deference to the author, Nikunj R. Mehta, of Oracle Corporation), proposes a key-value store of the NoSQL variety. And interestingly enough, this approach is getting serious consideration not only from Microsoft but from Mozilla as well. (In the aforementioned teleconference, Mozilla's Jonas Sicking said: "We’ve talked to a lot of developers, the feedback we got is that we really don’t want SQL...")

It's too early to know how it will all play out. About the only thing that's certain at this point is that Google has (thankfully) decided it's more important to back-burner proprietary approaches to web-app infrastructure than to stay on board with mainstream industry standards, even if those standards are (in some cases) still quite fluid and ill-formed. One hopes Microsoft will learn this lesson too. Otherwise? Yalta will decide. 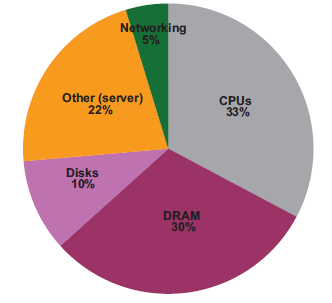 Ever wonder where all the electrical power ends up being used in a Google data center? This is the approximate breakout according to a recent book by Google engineers Luiz André Barroso and Urs Hölzle 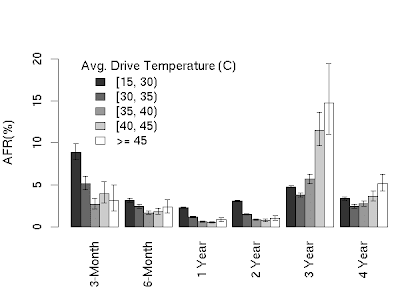 Many people have assumed that high temps are bad for disks. And indeed maybe they are bad for 3-year-old disks, but disks that fail at younger ages tend to be much more traumatized by cold than by heat. Pinheiro et al. give additional data for this, and it's pretty convincing. For example, if you have a look at Fig. 4 of the paper, you'll see a bathtub curve, showing that extremes of temperature are deleterious to disk life expectancy. Ironically, the bathtub curve reaches its lowest point at around 38 deg. C -- very close to human body temperature.
Posted by Kas Thomas at 7:14 AM