Does Capitalism End in Heat Death?

Not so long ago, I was in one of those jobs, in technology, where you feel unbelievably blessed to wake up every day in the knowledge that you get to work alongside some of the smartest people on the planet.

Eight years later, four of us are still sharing links/thoughts almost every day by e-mail, and I'm grateful for the opportunity to continue to exchange quips, carps, links, clips, and conundra with these three former coworkers who've so enriched my life. 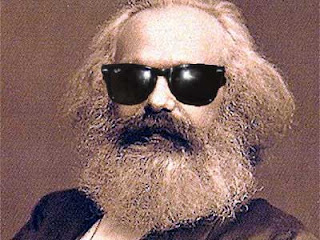 The other day, the four of us got into a lively exchange having to do with Uber and its implications, one of us arguing that Uber is a net "win" for consumers, and me (ever the contrarian) arguing that the win, if any, is Pyrrhic, since yes, sure, a $25 ride to the airport now costs $10 with Uber, but in the meantime 100,000 cabbies who were paying income taxes are now unemployed and drawing food stamps (and meanwhile $10 billion in cab medallion wealth has disappeared), putting a net burden on all taxpayers.

Then the discussion went in a more macroeconomic direction. I opined that we're possibly already witnessing a Great Unwinding, led by the current worldwide drop in demand (which is evident in historic lows in the prices of nearly all commodities, now, including bullion) coupled with job crapification and worsening technological unemployment.

The conversation then went as follows:


"The question is... Will this structural unwinding result in net-new higher skilled jobs? Or do we have to wait for this generation to retire / die before we see a ride [sic] in unemployment rates...?"

This is indeed the $64 trillion question. Obviously no one knows. We're in uncharted territory.

If you listen to the Fed, it's obvious they don't know what's going on either. They're waiting for unemployment stats to firm up a little more and inflation to rise. Neither one will happen, IMHO. The "new normal": 5.0% (plus or minus 0.3%) on U3 is the hard limit. We're there now. It isn't going lower. Likewise, inflation is 0.1% [retrieved 30 July 2015] and heading lower, not higher, due to softening demand. Liquidity and demand seem to be fully uncoupled. After $4 trillion of QE there's still no demand!

In 6 months or less we should know what the China blowback amounts to. I think that's everyone's secret worry right now. If China sneezes, do we all catch cold, or not?

Personally, I think monetary policy has done all it can do; ZIRP and QE lost, we need to admit defeat and move on to something else.

In the past, "something else" has always meant fiscal policy, but there's no political will to do anything dramatic there.

Global debt is pointing in the direction of Snowball Earth (74% of countries have seen debt/GDP ratio rise ominously since 2008), and the Greek experiment shows austerity only accelerates us in the wrong direction. The rest of the world is Greece in slow motion.

So the quest is to somehow do a global debt reset and/or jumpstart demand; otherwise Marx is right, capitalism ends in heat death.

So am I convinced capitalism is on a path to heat death? Not necessarily. It may be. The point is, we should be vigilant, and ask questions, and discuss what's going on.

It does seem possible to me that historic structural changes have occurred (are occurring) in the wake of the globalization and computerization that began in earnest in the late 1970s (see the 3 graphs in this post). It also seems to me (and to many others) that something qualitatively new and awful and different happened in the wake of the 2008 meltdown, because since then, the jobs that have disappeared have been mostly "good jobs," and the new jobs that have appeared have been mostly low-paying: 58% of U.S. jobs created since 2008 pay less than $14 an hour. (For a detailed breakdown, see the 2014 paper by the National Employment Law Project.)


I believe this is a worldwide phenomenon, driven by the entry of technology into the workforce, which has the effect of making non-technified jobs dumber and dumber (hence lower-paying). If this thesis is correct, it's extremely troubling, because it means the current worldwide rolloff in demand will only continue. Low demand is caused by low wages. Extrapolation of this trend does mean capitalism increasingly struggles with a low-demand problem. Meanwhile, the owners of the "means of production" are putting money not into plant expansion or growth but into stock-share buybacks and other programs that merely reinforce their ownership (and thus their hegemonic position relative to workers). This was indeed the endgame foreseen by Marx.

We live in an economy that produces richer winners, not more winners. This is the wealth inequality effect that has been documented so many times by so many researchers. The problem is, as wealth becomes more concentrated, the propensity for consumption declines. If we don't do something to reverse the course we're on, economic decline (stagnation of consumption, stagnation of incomes, a reduction in the tax base, deflation, low real growth, increasing national debt, etc.) accelerates, and we all find ourselves living in our very own version of Greece.

And at that point, yes, sad to say, Marx has the last laugh.