Why Do We Care So Much about the Fed?

Various danger signs in the global economy have a lot of people worried these days, and (as always seems to happen during these times) people are paying a lot of attention to what the Fed will or won't do, or should do, or shouldn't do. Which begs the question of why we have something called the Federal Reserve System in the first place. 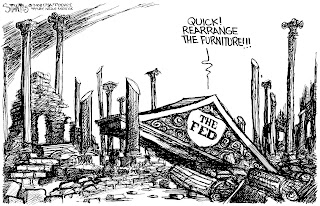 Historically, the reason we have something now called the Fed is because of a banking panic that happened in 1907. The 1907 Knickerbocker crisis was a financial crisis that took place over a three-week period starting in mid-October 1907, when the New York Stock Exchange fell almost 50% from its peak the previous year—a much bigger drop than the 1929 drop. (So take note: The 1907 stock-market event was bigger than the 1929 event, yet didn't cause a Great Depression. Also note, the Fed already existed in 1929 and yet failed to prevent the Great Depression.)

With regard to the 1907 crash, we learn from Wikipedia:


Panic occurred, as this was during a time of economic recession, and there were numerous runs on banks and trust companies. The 1907 panic eventually spread throughout the nation when many state and local banks and businesses entered bankruptcy. Primary causes of the run included a retraction of market liquidity by a number of New York City banks and a loss of confidence among depositors, exacerbated by unregulated side bets at bucket shops. The panic was triggered by the failed attempt in October 1907 to corner the market on stock of the United Copper Company. When this bid failed, banks that had lent money to the cornering scheme suffered runs that later spread to affiliated banks and trusts, leading a week later to the downfall of the Knickerbocker Trust Company—New York City's third-largest trust. The collapse of the Knickerbocker spread fear throughout the city's trusts as regional banks withdrew reserves from New York City banks. Panic extended across the nation as vast numbers of people withdrew deposits from their regional banks.

The panic might have deepened if not for the intervention of financier J. P. Morgan, who pledged large sums of his own money, and convinced other New York bankers to do the same, to shore up the banking system. At the time, the United States did not have a central bank to inject liquidity back into the market. By November, the financial contagion had largely ended, only to be replaced by a further crisis. This was due to the heavy borrowing of a large brokerage firm that used the stock of Tennessee Coal, Iron and Railroad Company (TC&I) as collateral. Collapse of TC&I's stock price was averted by an emergency takeover by Morgan's U.S. Steel Corporation—a move approved by anti-monopolist president Theodore Roosevelt. The following year, Senator Nelson W. Aldrich, father-in-law of John D. Rockefeller, Jr., established and chaired a commission to investigate the crisis and propose future solutions, leading to the creation of the Federal Reserve System.

According to the Fed's own web site, the Fed sees its mission as falling into the following areas:
It's interesting that the Fed sees maximum employment (and stable prices) as within its purview. It's not clear to me that the Fed has anything but the most contrived, indirect, strained "control" over the nation's job market, but apparently on November 16, 1977, the Federal Reserve Act was amended to require the Board and the Federal Open Market Committee "to promote effectively the goals of maximum employment, stable prices, and moderate long-term interest rates." Hence the first bullet point.

We can probably agree that the Fed's main purpose is to keep the banking system sound. It does this through a variety of policies (involving reserve requirements, key interest rates, and open-market actions) collectively known as monetary policy.

The Fed has other duties, including the collection and analysis of economic data. It seems to be okay at collecting data, but no better than mediocre at analyzing it. (Some would say mediocre is being kind.)

Forty years ago, when the U.S. economy was facing serious inflation and a wage-price spiral, the Fed was able to "put the brakes on" the economy by adjusting key interest rates upward. In 2008, the economy ground to a halt, and the Fed found out very quickly that it could not speed the economy up by lowering interest rates (even to zero). Instead, the Fed had to go to a liquidity-based pseudo-stimulus plan called QE (quantitative easing), which stimulated the only part of the economy it has direct influence over: the banking industry. As it happens, the vast amounts of money created in support of QE (a little over $4 trillion) mostly went to bond and mortgage buybacks that led to banks bolstering their reserves. It mostly didn't have the intended effect of stimulating borrowing, and in the low interest rate, easy-money environment of the last few years, most large coproations have used their money not to expand their core businesses (which would have meant hiring people) but to buy back stock. We see the effect of QE mainly in high stock prices (and low mortgage rates), not in hiring or economic expansion, which is why I called it a pseudo-stimulus. Defenders of the Fed would say that without QE, we'd now be in a very deep recession, but the question is whether we've prevented that scenario or merely delayed it. Common sense says that monetary stimulus (which can only be about borrowing) is not true stimulus. You can't borrow your way to prosperity if the economy isn't truly growing organically in the first place. (Which it's not.)

In the UK, there's been some talk recently of green QE, which is the idea of funding infrastructure projects by bonds that would be bought back under QE. Some have criticized this idea based on the fact that green QE conflates fiscal policy (which tends to be agenda-based) with monetary policy. However, monetary policy is arguably already conflated with fiscal policy, inasmuch as traditional QE's "stimulus formula" is agenda-based, with a definite sector bias (toward finance and housing). The question of whether QE should now favor other sectors and other agendas is a fair one. Many people would argue (convincingly, I think) that we're already expecting monetary policy to do too much.

The reason we lean so heavily now on monetary policy (Fed action; QE) is the lack of tolerance in Washington (and London and elsewhere) for real public policy decision-making. Fiscal policy decisions (decisions involving taxing and spending) have become too difficult, politically. It's not just that our leaders are cowards; it's that contentiousness has paralyzed government. It takes a full-blown crisis now to get anything done. And more often than not, the will of the people is ignored. (For example, the overwhelming majority of Americans favor taxing the rich more aggressively; but this isn't likely to happen while the rich are pulling the strings.)

My take? Looking to the Fed (or to monetary policy generally) for answers is a form of denial. We need to confront our problems head-on and demand real solutions, not QE-based wishful-thinking non-solutions that favor banks and landlords, exacerbating the wealth-inequality problem. We need to start dealing with real issues (job creation, opportunity, the need for high wages, less student loan debt, etc.) now, before the next crisis happens. The Fed didn't prevent the Great Depression. It's not going to prevent the next depression. We need to redeploy real, existing wealth, now, in ways that make the economy stronger for everyone, so that we don't have to invent whatever comes after the Fed, after whatever disaster comes next.

Also please visit HackYourDepression.com when you have a chance, and share that link with someone you know who might be suffering from anxiety or depression. Buy a copy of the book! Support this blog; support a friend in need.