The End of Money

What is money? It turns out economists don't have a terribly rigorous definition for it; there's no consensus definition of money beyond the old tripartate "medium of exchange," "medium of account," "medium of storage" baloney, which neatly avoids defining medium (which I thought was the whole point). You can take the modern-physics point of view that matter (mass) cannot, itself, be defined, except through its interactions and behaviors. Hence, money should not have to be defined except through its behaviors. Which is fine and good, except that modern economics, with its Rube Goldberg mathematics, is (unlike physics) pretty much a pile of shit when it comes to predicting anything worth knowing. Economics is not physics. 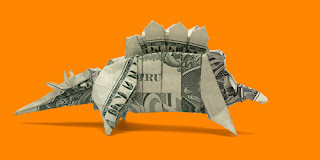 The usual childish way of "explaining" money is to point out that before money, trade had to be conducted in terms of barter. This fairy tale overlooks the fact that no important economy in human history was ever barter-based, and coins (which date to maybe 700 BCE) are a fairly late development. The Egyptians, Sumerians, and others (e.g., South American cultures) had extensive "systems of account" long before coins were invented. The concept of accountable wealth was already quite old, in fact, when this curious thing known as money appeared.

Steve Roth does an excellent job of summarizing the poor state of "what we know about money" in his fine post Did Money Evolve? You Might (Not) Be Surprised, which I won't try to recap here. One of the key contributions of Roth's article comes at the very beginning, when he points out:


[E]xchange, trade, reciprocity, tit for tat, and associated notions of “fairness” and “just deserts” have deep roots in humans’ evolutionary origins. We see expressions of these traits in capuchin monkeys and chimps (researchers created a “cash economy” where chimps were trained to exchange inedible tokens for food, then their trading behaviors were studied), in human children as young as two, in domestic dogs, and even in corvids — ravens and crows.

This gets to the heart of the matter, because money does seem to be a uniquely human abstraction of the much larger, more universal notion of reciprocal behavior seen in other species. It's an abstraction that relies on concepts of numeracy, atomicity, equivalence (something can be a token for something else), and social exchange. It's a method of account for reciprocity, an acknowledgement that fairnesss can be ratified mathematically. Money is simply the artifact that embodies these principles—principles of accountable fairness.

So if we put our sociological hats on (recognizing that money is inherently a social construct; it makes no sense to have money if no one else is around), and if we understand money as a system of account for reciprocity, it's somewhat easier to understand the rise of democracy in ancient Greece (coming around the same time, and in the same place, as the invention of coins); it's easier to understand the emergence of capitalism (and its association with the emergence of paper money); and it's also somewhat easier to comprehend the current deterioration of democracy (which I write about all the time in this blog), and rise in inequality, as a delapidation of fairness, economically expressed, culminating—surprise!—in all the recent chatter about the need to ban cash.

As Western society (the capitalist democracies, now taken over by corporate elites) lets slip the basic principles of fairness upon which it was founded, it's no surprise that we see story after story about the supposed desirability of eliminating currency. Cash is the ultimate symbol of reciprocity, but there is nothing reciprocal or symmetric or fair in what the owner class has in mind for the underclasses. We should not even demand to be paid! We should simply give all wealth to the owners, and let them take care of us as they see fit. This is the constant message of Wall Street, the Koch brothers, the GOP, and yes, even the Democratic techno-elite (aptly represented by the Clintons). They want it all. They won't be satisfied until the top 0.1% own and control all wealth, at which point (obviously) it makes no sense, any longer, for anyone to have "money."