I haven't blogged a heck of a lot over the past month or so, because I'm in the middle of a Quixotic quest to finish a screenplay. It's been heck of a journey; and the journey is (in many ways) just beginning.

I can't say a lot about the project just yet (although I'll definitely be saying more in future posts, so watch this space). Here's what I can say.

First, writing a screenlay is hard. It's harder than a novel. By quite a bit, I'm afraid.

Secondly, it's difficult writing something with the knowledge that maybe only a handful of people will ever read it. I keep telling myself: It's good exercise. Even if it goes nowhere, it leaves me with all the scaffolding for a novel: well-defined characters with character arcs, a story, backstories, plot points, subplots, reversals, key dialog, key visuals. 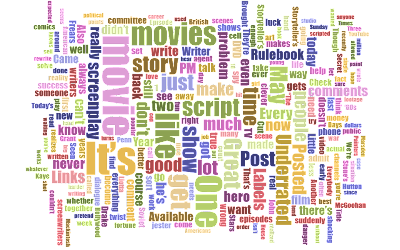 Thirdly, having said all this, I wouldn't waste my own (nor anybody else's) time on a project I didn't think was truly epic, relevant, commercial, original, and flat-out un-putdownable. The project is based on an original idea I had about two years ago. It's been germinating and blossoming ever since.

It's a high-concept story involving world hunger, with a Philip K. Dick slant. The concept proceeds from the idea: What if you (or someone you knew) stumbled onto a tool, technique, technology, or idea that really, truly could make a dent in world hunger? What then?

My first stab at this was a manuscript for a young adult novel that I got 100 pages into (a year ago) before making the unforgivable mistake of sending off a few queries to agents, on a lark. To my shock and horror, I got an immediate request for a full read. And of course, there I sat with 25,000 words written and 45,000 unwritten. I never got back to the agent.

Instead, I put the project away for a while and thought about it some more. And I realized that the story would play out a lot better if the hero was significantly older. Rather than have the hero be a 17-year-old Indian-American whiz kid, I decided it would be better to make him a 29-year-old white-upper-middle-class American grad student with a female Hindustani lab partner (a post-doc) who, as his intellectual equal (and cultural superior, in many ways), can keep our hero honest, point up his faults, challenge him, goad him, infuriate him, and eventually (of course) fall in love with him—when he finally slays the (figurative) dragon.

But wait, you're saying, 29 is awfully old for a grad student, isn't it? Actually, I've met the type before. They get a master's degree right off the bat, but when it comes time to finish the Ph.D., the lab work just never seems to add up to a thesis. Nature takes its time handing out dissertation-worthy scientific discoveries. You can't force a discovery. Laboratory science is an art. Luck is involved. In my grad student days at U.C. Davis, I knew several "older" students who had labored valiantly for six years (seven being the max allowed by many universities) to achieve a coherent set of results for a thesis, without ever actually getting there. If you're one of these people, it can be frustrating to watch a younger grad student move into the lab, work on something for a year, stumble onto a great scientific result, and have a Ph.D. in 24 months. The two-year science Ph.D. is a very real phenomenon. So is the seven-year Ph.D., unfortunately.

My "what if" story follows the pair of young scientists on a journey that takes them from New Haven, Conneticut to Madhya Pradesh, India. It's epic in scale, global in relevance (and multi-ethnic in cast), has all the elements of a good suspense drama, and forces the viewer (or reader) to confront hard questions. What if X? What if Y? What if Z? What if all three?

I'll be able to reveal more specifics soon. I need to nail Act III first. And that could take a while. But I'm working on a self-imposed deadline. In two weeks, the screenplay will be done—or I'll stop eating until it is done. Hopefully it won't come to that.

On the theory that it is never too early to attach talent, I invite any actors or film people who might be interested in seeing the WGA-registered script when it's available (which is soon—days, not months) to drop me an e-mail. My hushmail dot com address is kasthomas. Inquiries will be kept in confidence.