If people knew that taking antidepressants for two years or more doubles their risk of diabetes, would they continue to take them? That's what I wondered when I saw the paper by Andersohn et al. in Am J Psychiatry 2009; 166:591–598 called "Long-Term Use of Antidepressants for Depressive Disorders and the Risk of Diabetes Mellitus." It's an eye-opening study, drawing on data from the UK's patient database. The numbers are solid and the results hard to argue with. Even after controlling for body mass index (BMI), hypertension, hyperlipidemia, smoking, age, and other factors, the authors of the study found that long-term use of antidepressants (of any kind: tricyclic, MAOI, SSRI) was associated with an almost two-fold greater risk of diabetes.

This is a distressing result, because it indicates that antidepressants add significantly to the burden of disease. In the U.S., where 27 million people take antidepressants (60% of them for two years or longer), it could mean an extra million cases of diabetes.


Before you start thinking that maybe depression in and of itself is predisposing to weight gain and diabetes (which it is), go read the Andersohn paper. The authors already thought of such things and controlled for them in their study control populations. They found that even after controlling for the usual risk factors, recent long-term (24 months or more) antidepressant usage increased the risk of diabetes by 84%. Some numbers from the study:


Luvox (fluvoxamine) appears to stand out as especially risky, but this is probably an artifact of the small sample size for that drug. But conversely, we can put more stock in a number like 1.33 for paroxetine (Paxil), since it's based on a larger sample size. (For confidence intervals, see the original study.)

The Andersohn study was motivated by an earlier finding that continuous antidepressant use over an average study duration of 3.2 years was associated with an 2.6-fold increased risk of diabetes (95% CI=1.37–4.94) in the placebo arm and 3.39-fold increase in risk (95% CI=1.61–7.13) in the lifestyle intervention arm of the study reported in Diabetes Care. 2008 Mar;31(3):420-6. The Andersohn work confirms the previous finding.

If there's one thing America doesn't need right now, it's more cases of diabetes. Diabetes is already out of control in the U.S. In many counties (all of those shown in dark red below), diabetes already afflicts more than 11% of the population. 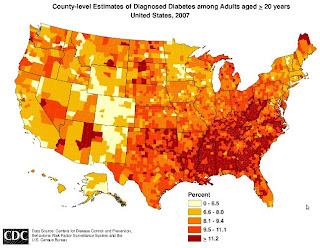 Note: Today's post is an excerpt from my (free) book Mental Health Myths Debunked, available as ePub or PDF from NoiseTrade. Go download a copy now!

Email ThisBlogThis!Share to TwitterShare to FacebookShare to Pinterest
Labels: antidepressants and diabetes