Why Oil Production Isn't Going Down

Oil inventories have been growing lately, as you know if you've been reading this blog: We now have 450 million barrels on hand, versus an available physical storage capacity (in the U.S.) of 521 million barrels. Most major (and many smaller) oil companies have made drastic cuts to CapEx expenditures for 2015, which means less exploration and new drilling. Which should slow the pile-up of crude stocks, right?

Wrong. It's true that many less-productive rigs are being idled. As of a week ago, only 866 rigs were still active in the U.S., down almost 50% from October, when they’d peaked at 1,609. But here's the nasty little secret most people outside of the oil industry don't know: Many small to midsize producers have no way to service their debt except to sell oil. Therefore, most are continuing to bring oil to market as fast as they can (but also as cheaply as they can, using only the most efficient rigs). In fact, the cheaper oil becomes, the more oil these producers have to bring to market to service their debt. Hence, production will only continue to skyrocket. 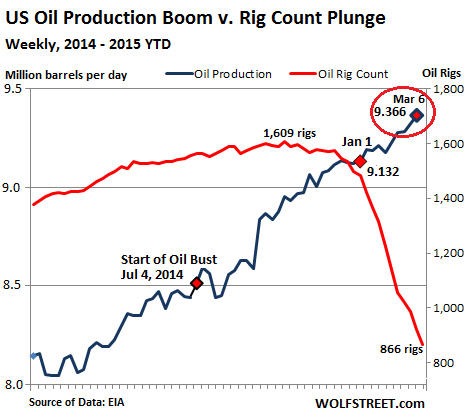 Some indication of how serious the situation is can perhaps be garnered from the surprise announcement last Friday that the U.S. government will buy 5 million barrels of oil for the Strategic Petroleum Reserve. Just a year ago, the Dept. of Energy caught oil markets off guard with a "test sale" of 5 million barrels of oil from the Strategic Petroleum Reserve. Thus, the Dept. of Energy has gone from selling oil to being a buyer of reserve oil, in one year.

It will have little effect, in any case. While 5 million barrels may sound like a lot of oil, it represents only one week's additional inventory surplus, or half a day of production. Unless the government decides to buy this much oil every week, we're looking at a continued pile-up of 4 to 7 million barrels of surplus oil per week, meaning we might be just 10 weeks away from hitting the absolute storage limit of 521 million barrels. As we approach that limit, oil prices will fall, perhaps precipitously, and some producers will default on their debts, a process that has already begun.

For more coverage of the oil situation, I recommend paying attention to wolfstreet.com.

Will the Fed Raise Rates?

Lots of talk about the Fed meeting this week. Will they stop using the word "patience"? Will they talk about raising rates? Will the rate changes happen this summer? Etc.

Let's remember one thing. Even if the Fed does nothing, the Euro (which is in freefall) will pass through dollar parity on its own, and continue downward. If the Fed raises rates, the dollar will strengthen at exactly the wrong time, with disastrous effects not only for American industrials but debtor nations and others around the world.

The Fed is by nature cautious. I like to think they're also sensitive to the needs of business. And I'm delusional enough to think they won't treat the American economy as if it exists in a vacuum; they will consider the global consequences of their actions.

Therefore there is no way rates are going up any time soon. Hopefully, this becomes clear by Wednesday.

The market is rallying on the rumor; will it rally on the news, too? Probably. This market doesn't want to go down.