Ignoring science isn't just a Republican problem. It's an American problem. (mashable.com). A fine opinion piece by Dan Rather. Ten thumbs up.

The Earth Could Be Treeless in 300 Years (takepart.com). The world faces a 10-billion-tree annual deficit, which is not sustainable. 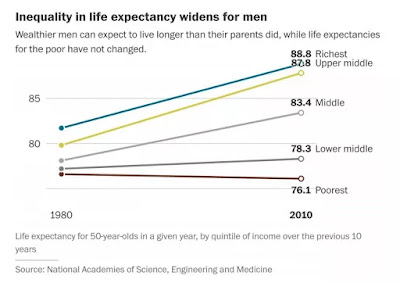 Wealthier men are living longer (knowmore.washingtonpost.com). The richest men live to be (are you ready for this?) 88.8. The poorest live, on average, 76.1 years. Of course, these are only averages. Keep telling yourself that.

Wages have fallen for the most common high-paid jobs (vox.com).

Americans grossly overpay for cancer drugs (reuters.com). It's not just about one Pharma Bro.

"Tree of life" for 2.3 million species released (phys.org). Bear in mind that everything from about 5 o'clock on the (circular) tree to 3 o'clock (going clockwise, of course) happened in just the last 1 billion years. Vascular plants and animals are fairly new.

Historical analysis of national subjective wellbeing using millions of digitised books (voxeu.org). Researchers used "sentiment analysis" to uncover subjective-wellbeing trends in published literature from 1776 to Y2K, for six countries. It's a fascinating idea, but the article is underwhelming, in part because the data series ends in 2000 (I wanted it to go to at least 2008) and in part because it seems as if the writeup has no "Discussion" section (BYOD).

Teen prosecuted as adult for having naked images – of himself – on phone (theguardian.com).

Your Guide to Dieselgate (jalopnik.com). CliffsNotes version of the VW cheating saga and why it's such a Big Deal.

If You Can’t Afford This GPS Ankle Bracelet, You Get Thrown In Jail (ibtimes.com). Debtor's prison. But hey, at least you're not homeless.

U.S. police officers have shot and killed more than 700 people this year (WaPo). You have the right to remain silent...

Thank you to all the crazy maniacs everyone who retweeted me recently:

Visit http://hackyourdepression.com/ if you haven't already! Buy one of my books. Or read the free samples, at least!