Selling Plasma to Survive (vox.com). Over a million American families live on $2 per day.

Who Won Science Fiction's Hugo Awards and Why It Mattered (wired.com). Quite apart from its other themes, this article is a fascinating, perhaps not entirely intentional study of sci-fi's long tradition of racist white-maleness.

Baby, We Won't Drive Our Cars (techcrunch.com). According to Phil Carter's analysis:
Wait, Uber? The company that owns no cars, has no employees? Will build a vehicle fleet? Um, no. Not without changing its entire capEx model. Gas stations will disappear? To some extent, maybe. Parking industry decline? (In America? Really?) Connected-car startups, safer/cheaper, blah-wah-wah, yes yes yes, roads will get safer. (As they already are getting, year by year.) Spare us the breathless triuumphalism. Insurance companies and fleet owners are the big winners here, not ordinary citizens. Don't drink the Kool-Aid. Wake the hell up.

For a somewhat different perspective: A Roadmap for a World Without Drivers (medium.com). Note the discussion of autonomous vehicles as force multipliers for terrorists. Also, "Traveling a mile in an AV is going to be deliriously cheap, and when we make something cheaper, we consume a lot more of it." Good point. When refrigerators and air conditioners became more efficient, consumers responded by buying more of them. Will the same happen with vehicles? Barclays forecasts that the autonomous fleet will be 60% smaller, and vehicle sales will be down 40%. No consideration at all given to the fact that demand will likely expand to fill the capacity available (much the way PC software expanded in size to fill the space available as hard disks went Moore's-Law). 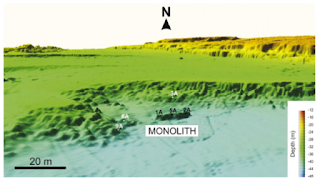 Unexplained Monolith Discovered in Mediterranean (io9.com). Archaeologists working in the Sicilian Channel between Tunisia and Sicily have found a submerged 40-foot-long (8-meter) limestone monolith, with three holes bored through it, estimated at nearly 10,000 years old.

Long Work Hours Tied to Stroke Risk (reuters.com). If you work 55 hours or more per week, read this. Data come from 25 studies in Europe, the U.S., and Australia, on more than 600,000 workers who were tracked for seven to eight years.

Trump Alarms GOP with Tax Threats (nytimes.com). Trump would tax corporations that move jobs out of the U.S. Imagine that.

Congresswoman Lowey Proposes Social Security for Unpaid Caregivers (patch.com). The Social Security Caregiver Credit Act would be particularly beneficial to women, who represent two-thirds of the more than 65 million unpaid caregivers nationwide. Nita M. Lowey is the Ranking Member on the House Appropriations Committee. (But don't worry, Republicans will scuttle it.)

Citigroup Chief Economist Thinks Only "Helicopter Money" Can Save The World Now (zerohedge.com). If China unloads $1 trillion worth of U.S. Treasury instruments, it effectively undoes 60% of QE3, confounding the Fed's woes; the Zero Hedge thesis is that QE4 is (therefore) inevitable. Homework: See if you can parse all this without your head exploding. For extra credit: Who will manage the situation more incompetently, China, or the Fed?

From Michael Hudson’s Killing the Host (wallstreetonparade.com): “A parasite’s toolkit includes behavior-modifying enzymes to make the host protect and nurture it. Financial intruders into a host economy use Junk Economics to rationalize rentier parasitism as if it makes a productive contribution, as if the tumor they create is part of the host’s own body, not an overgrowth living off the economy. A harmony of interests is depicted between finance and industry, Wall Street and Main Street, and even between creditors and debtors, monopolists and their customers.”

Only 2% of Americans Are "Very Satisfied" with How Things Are Going in America (quinnipic.edu) whereas 71% of American voters are "dissatisfied" with the way things are going in the nation today. But no one knows what to do about it, so . . .

Is Silicon Valley in Another Bubble, and What Could Burst It? (vanityfair.com). A report from Unicorn Valley.

Leveraged Bubbles (voxeu.org). Economics professors Òscar Jordà, Moritz Schularick, and Alan Taylor explain bubble metrics and argue that not all bubbles are created equal; the worst being real estate bubbles. (So, but: we're currently in a financial asset bubble. Is that supposed to be comforting?)

Sizing Up the Global Economy (janus.com). Wherein Bill Gross hits many nails on the head. Kudos to Gross for this excellent analysis. Short version: Fiscal stimulus is all that matters now (but it ain't happening). Go to cash.

Join us here every Friday for all the freakonomic links you may have missed! Tell a friend.