Elevated CO2 Levels Directly Affect Human Cognition, New Harvard Study Shows (thinkprogress.org). The study suffers from low sample size (N=24), but shows 61% higher cognitive scores for people working in a "green" office building than in a standard office building with high CO2 levels. The implications are ominous, not just for office workers but for schools, where CO2 levels are often in the thousands of ppm. (Office buildings strive for 1000 ppm max. Outdoors, CO2 is 400 ppm, unless you live in a big city.) No wonder boardroom America is brain-dead. They're getting too much carbon dioxide! 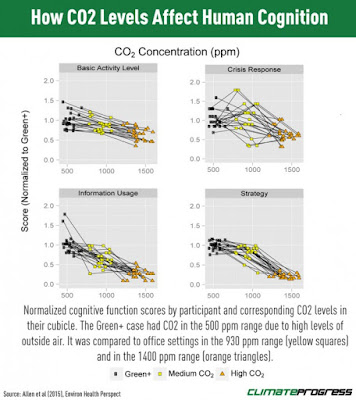 39% to 51% of bacteria that cause infections after surgery are already resistant to standard antibiotics (time.com). Somehow it's "news" that hospitals are breeding grounds of superbugs. This is most assuredly not news if you work in Infection Control. Hasn't been for 30 years.

Corruption runs in the family at American neurorehab centers (revealnews.org). If you've never had a family member in one of these facilities, you should thank your lucky stars every single day. See also: A mountain of misconduct (revealnews.org).

People's Deepest, Darkest Google Searches Are Being Used Against Them (theatlantic.com). Be careful what you search for.

And now for some American Exceptionalism:

In this graph of life expectancy at birth vs. health spending per capita, one country stands out pic.twitter.com/feywaZz4vM
— Conrad Hackett (@conradhackett) November 5, 2015

Draw your own conclusions.

Americans over 30 are more miserable than they’ve ever been (marketwatch.com). The headline is a bit of a reach, IMHO. However, see also:

Most Americans Are Unhappy At Work (forbes.com). The numbers here are quite believable, and sad. According to the current edition of The Conference Board Job Satisfaction survey ($395), only 48.3% of US workers are satisfied with their jobs, down from 61.1% in 1987. (Also: "Among men, 26.1% say they’re satisfied with their promotion prospects versus 21.4% of women, and 38.3% of men are happy with their wages versus 34.3% of women.") According to Gallup, only 30% of Americans feel engaged at work. My take? Wage stagnation is bad for business, and bad for the country generally. Return profits to workers, not shareholders. Stop with the cowardly stock buybacks. Invest in people.

Is America Ready for Safe Injection Rooms? (vice.com) No, but it sounds like something for Wal-Mart to look into.

The GOP and the Rise of Anti-Knowledge (billmoyers.com). The opposite of knowledge isn't ignorance. It's the Republican Party.

Carson Plummets in Polls Amid Reports He Did Not Stab Anyone (newyorker.com). Sadly, the real Carson is much funnier than this New Yorker parody piece.

Did a Woman in Germany Spontaneously Combust? (broadly.vice.com)

Fat is the New Normal (businessinsider.com) Totally not news, but it's good to see Business Insider catching up to the 1990s.

The Disturbing Truth About How Airplanes Are Maintained Today (vanityfair.com). Airlines increasingly outsource their maintenance to China, Mexico, and other places where FAA inspectors rarely set foot.

Finland prepares universal basic income experiment (inhabitat.com). If rolled out nationwide, every Finnish citizen would get 800 euros a month. (A similar program is currently operating in Utrecht in the Netherlands.) Meanwhile, existing social programs would mostly be scrapped, and any income above 800 euros/month gets taxed as usual. So it's similar to the negative income tax proposed by Nixon in the 1970s (which actually passed the House, only to die in the Senate Finance Committee).