White Middle-Aged Americans Are Dying Early (pnas.org). "This paper documents a marked increase in the all-cause mortality of middle-aged white non-Hispanic men and women in the United States between 1999 and 2013. This change reversed decades of progress in mortality and was unique to the United States; no other rich country saw a similar turnaround." One of the disturbing graphs from the paper: 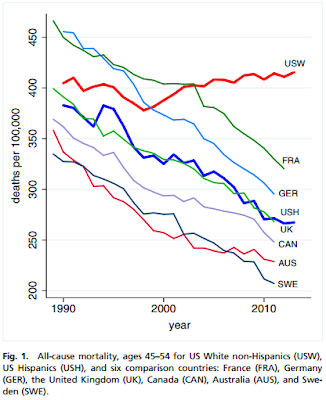 Obesity? Nope. "[An] increased prevalence of obesity accounts for only a small fraction of the overall deterioration." A much  larger fraction is accounted for by suicide, alcoholism, and drug overdose.

Read the paper. Aborb the results. Ask yourself what it is about America that's making so many people want to check out early—against medical advice.

More Than Two-Thirds of Antidepressants Prescribed Against Guidelines (madinamerica.com). "Our data indicate that antidepressants are commonly used in the absence of clear evidence-based indications." And it all ends up in the water supply.


"We think consumer bifurcation has been an important driver," Hershey CEO John Bilbrey said on an earnings call, referring to the growing gap between upper-income and lower-income consumers.


The share of households in the middle tier of income earners has fallen to 43% from 55% since the 1970s, according to The New York Times.

The Mystery of the Vanishing Pay Raise (nytimes.com). There's no mystery. The owner class has pocketed all the gains. "The share of corporate income going to workers has sunk to its lowest level since 1951."

What Would It Take to Have an Economy Full of Good Jobs Again? (theatlantic.com). Um, it might start with admitting that U.S. capitalism, as currently conceived, isn't capable of fixing itself. Laissez-faire capitalism enriches the rich (by design). "Trickle up" is a feature, not a bug. Runaway inequality, ditto. Disappearing middle class, ditto. Time for an intervention? Or continue rewarding the winners with tax breaks? You decide.

The Fed Has Hurt Business Investment (hoover.org). A Nobel laureate—and a former Fed governor—explain, in clear, simple terms, why monetary policy has helped financial markets but not fueled true productivity (nor wage) gains.

Welcome to the Internet of Paranoia (theverge.com). This hits home for me because my wife has crippling paranoia due to schizophrenia. The Internet only makes it worse. Also see:

The Internet of Things You Don't Really Need (theatlantic.com). Do we really need our coffeemakers to talk to our refrigerators? Who benefits? Who pays?

These Are the Charts That Have Money Managers Spooked (bloomberg.com). My favorite is the Food Stamps chart (right).

Optimism Is the Enemy of Action (theatlantic.com). "People became too relaxed and it showed up on their physiological tests. This is exactly what you don’t want to happen as you’re planning to tackle a goal."

Study on Online Charter Schools: ‘It is literally as if the kid did not go to school for an entire year’ (WaPo).

High-Profile New York Charter School Kept List of Kids It Wanted to Force Into Quitting (slate.com). It's important to have goals.

Wal-Mart Enters Drone Delivery Race (www.pymnts.com).  “There is a Wal-Mart within five miles of 70% of the U.S. population, which creates some unique and interesting possibilities for serving customers with drones.”—Dan Toporek, Wal-Mart drone  spokesperson.

FDA Blesses Cancer-Killing Herpes Virus (theguardian.com). Not mentioned in the story: A course of therapy using Imlygic will cost $65,000. Making it a "game-changer"? For whom?