The 3 deadliest drugs in America are all totally legal (vox.com). Of course, it's important to add: "Deaths aren't the only way to compare drugs' harms. Some drugs, such as alcohol and cocaine, may induce dangerous behavior that makes someone more predisposed to violence or crime. Other drugs like psychedelics may trigger underlying mental health problems or psychotic episodes. When evaluating the overall harm caused by drugs, all of these factors should be taken into account." Even so, let's be clear that drugs, per se, aren't the villains (any more than guns, per se, are): We have to ask why the demand for suicide-substances (and suicide hardware: firearms) is so high. (And by the way, most firearms deaths are, in fact, suicides.) Null hypothesis: We live in a suicide culture. Tobacco, alcohol, pain-killers, guns, are in high demand because people want an escape from the madness. 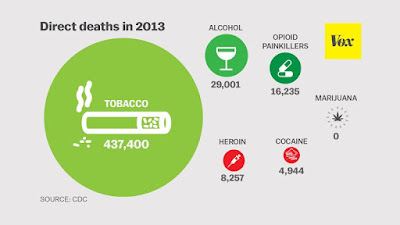 "Good" Jobs Aren't Coming Back (theatlantic.com). The good news is, "onshoring" is bringing jobs back to the U.S. The bad news is, they don't pay squat.

Most Americans Are No Longer Middle Class (npr.org). Relax. The middle class isn't totally gone yet. That will take another couple of decades.

Wikipedia has a ton of money but it still wants yours (WaPo). The Wikipedia trollmeisters  folks are sitting on a hoard of $77 million (yes, $77M in the bank free and clear), yet they feel no shame about panhandling you for $3.

The Cosmic Microwave Background Radiation Power Spectrum as a Random BitGenerator for Symmetric- and Asymmetric-Key Cryptography (arxiv.org). Who knew the Big Bang is a FIPS-140-2-compliant random number source?

Academic Study Says Fed Engaged In Systematic Leaks To Insiders (valuewalk.com). The question moves from one of credibility, to whether the Fed are, in fact, criminals, or condoning criminal activity in their midst.

In America, there's a gun for everyone https://t.co/JjiiydrFjJ pic.twitter.com/aJepteXzW5
— Conrad Hackett (@conradhackett) December 4, 2015

No, Finland Is Not Giving Every Citizen $870 a Month (kela.fi). Yahoo News and others are treating the Finnish program as if it's a done deal, even though it's nothing but a study that's just getting started.

When Undercover Credit Card Buys Go Bad (krebsonsecurity.com). If you've got a few minutes to read this, it's a fascinating look at how stolen card data gets sold and re-sold by crooks. Creepy as all get-out.

The World's Largest Mining Operation Is Run by Fungi (blogs.scientificamerican.com). A thoroughly enchanting story about the invisible lives of tree roots, rocks, and fungi.

Warm Water May Spell the End of New England’s Iconic Cod (theplate.nationalgeographic.com). "The Gulf of Maine is warming faster than 99.9 percent of the rest of the oceans. It is happening so quickly that it has harmed cod’s ability to replace its numbers even though fishing had almost ceased."