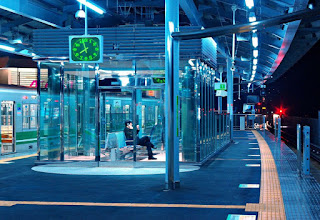 How Blue Lights on Train Platforms Combat Tokyo’s Suicide Epidemic (nextcity.org). "A research paper published in the Journal of Affective Disorder in 2013 (four years after the first lights were installed) found that there was an 84 percent decrease in suicides at stations with the blue lights." Why isn't this being done worldwide?

Why Big Oil Should Kill Itself (project-syndicate.org). Time to innovate or liquidate, argues economist Anatole Kaletsky.

Stratfor's Chilling Predictions for the Next Decade (uk.businessinsider.com). Lots of thought-provoking stuff here. An overarching theme (my take): If the worldwide recession deepens, and governments become weaker due to debts and political unrest, they may become more repressive, not just in China, but all over.

The Technology That's Revolutionizing Finance (businessinsider.in). Banks have bypassed bitcoin, but they're going gaga for blockchain tech. Why? Blockchain "distributed ledger" technology is about trust propagation and non-repudiation. For banks, it could shorten settlement times and reduce friction without increasing cost. (See What the Blockchain Means for Economic Prosperity.) Integrating peer-to-peer trust in a banking system built on distrust will be challenging, however, so don't expect miracles any time soon. The situation calls for innovation and forward thinking, two things banks are notoriously poor at; hence the big banks are scrambling to invest in #fintech startups, which (ironically) tends to make them spectators in their own demise  evolution. Warning: Disruption ahead.

Meanwhile, 62% of Americans Have Less Than $1000 in Savings (marketwatch.com). In the richest country on earth, most citizens are broke, or close to it, maybe because half of American workers made less than $28,851 (median wage) in 2014, which is less than a living wage. And yet the beauty of the American system (if you're a plutocrat) is that the exploited classes enthusiastically endorse their own exploitation, because it's the greatest system on earth!

If You Were Handed $1,100 a Month, Would you Amount to Anything? (latimes.com) The headline's implication, of course, is that people are (at root) hopelessly lazy and would amount to nothing if left to their own devices. And yet, it's human nature to want to be productive. Even the rich choose to work. (Is that not proof enough that people who don't have to work will work anyway?) Why is it all mainstream reporters, covering "basic income" initiatives (like this very tiny one underway in Germany), feel the need to denigrate such programs? "In Finland," we learn from the LA Times story, "a new conservative-led government announced plans this month to hand out a universal basic income of nearly $900 per month starting in 2017." Hand out? Why are we framing this discussion using loaded terms like hand out? Are people going to buy too many Ferraris, take too many round-the-world vacations, on $900 a month? Isn't it possible people will pay actual bills with that amount of money? (Bills they can't pay now because they're on the brink of poverty?) What's with this constant hate-the-poor attitude? And why does the LA Times feel such a strong duty to cater to it?


At Capital One, Easy Credit and Abundant Lawsuits (propublica.org). Don't fall behind on your Capital One card. They sue customers. A lot.

Switzerland to Vote on Banning Banks from Creating Money (telegraph.co.uk). Most people believe (mistakenly) the government creates a country's money supply, but in fact money is created when a bank makes a loan (and is destroyed when a loan is paid off). A popular movement in Switzerland aims to limit money creation to central banks (i.e., the government), a plan that can only work if fractional reserve banking (banking as we know it!) is disallowed.

The Flawed System that Allows Companies to Make Millions Off the Injured (WaPo). A story about how, if you win millions in a structured settlement, you'll likely lose almost all of it to various vultures. I love how WaPo frames it: a "flaw." The system isn't the problem; there's just a flaw in an otherwise great system!

Is Everyone “a Little Autistic”? (unstrangemind.wordpress.com). Um, no. It only seems like it sometimes.

CITE: The $1 billion city that nobody calls home (cnn.com). In the New Mexico desert, a city will be built where no human can go.

China Police Detain 12 in Connection with Landslide Disaster (reuters.com). "In a brief report, the Xinhua news agency said police had taken 'coercive measures' against 12 people." Meanwhile, the former director of the Guangming New District Urban Management Bureau, a man named Xu, killed himself, or at least that's the official story.

Can a French Friar End the 21st-Century Slave Trade? (vanityfair.com) A beautifully written story on an ugly subject; but notice how intricate the semantic dance becomes, in defining slavery.


Modern slaves are forced laborers. They are held in captivity of one form or another and made to work for the benefit of others. They may or may not have been trafficked. Their condition may be temporary, but it can also be fatal. They inhabit a parallel world, sometimes in plain sight.

"Captivity of one form or another" comes dangerously close to describing coal miners, day laborers, hotel maids, Walmart greeters. Do shackles have to contain protons to be "real"? Students of sociology, please discuss.

If you're a student of the visual arts, or of Photoshop, trust me, you need to see this:

And just for fun: How to Trick a Neural Network into Thinking a Panda is a Vulture (codewords.recurse.com), or "We're in No Danger of Emulating the Human Brain in Software Any Time Soon."

Also noteworthy: The Unsuccessful Self-Treatment of a Case of Writer's Block (ncbi.nlm.nih.gov), replicated many times by many researchers.

These are some of the stories that made at least one of my eyebrows go up, this week. Last week's report can be found here. Meanwhile: Happy New Year! Hope 2016 finds you in good health. Be well. Be safe!

A big thank-you and HAPPY NEW YEAR to all the great people who retweeted me yesterday: