I Watched 14 Police Officers Take Down a One-Legged Homeless Black Man Outside Twitter HQ (medium.com). From August. A story about what kind of place America has become.

Irradiated: The Hidden Legacy of 70 Years of Atomic Weaponry — At Least 33,480 Americans Dead (media.mcclatchydc.com). U.S. taxpayers have spent $12 billion on payouts and medical expenses for more than 53,000 workers, most of whom died of cancer. A fantastic series of reports; long form journalism at its best.

Science Myths That Will Not Die (nature.com). Excellent piece on one of my favorite topics, the undiminished role of dogma and orthodoxy in Science.

DNA Methylation Linked to Formation and Maintenance of Memory (nature.com). Dumbed-down version here. While DNA methylation has been implicated in memory formation before, this study provides stronger evidence for its importance.

Cheap Gas Spurs SUV Sales and Puts U.S. Climate Goals at Risk (reuters.com). "Nearly 59 percent of U.S. vehicle sales this year have been of sport-utility vehicles, pickup trucks, or other larger vehicles, up from 54 percent last year, according to industry consultant Autodata Corp." That may be. But I still say sales of Big/Stupid have about peaked, historically, just as sales of sugary carbonated drinks, cigarettes, and lots of other things that are basically stupid and counterproductive (yet continue to be heavily marketed by old-school brands) have peaked. If oil goes to zero, I'm not going to trade my Camry for a Hummer, sorry. Nice try.

Cancer Studies Clash Over Mechanisms of Malignancy (nature.com). Are most cancers fundamentally due to bad luck, or bad environment? A new study says the latter.

Even if the Global Warming Scare Were a Hoax, We Would Still Need It (telegraph.co.uk). A fascinating report by Ambrose Evans-Pritchard on China's role in policing post-Paris-accord emissions. Many, many interesting statements. For example: "The key point is that only 60pc of China's coal is used for power plants, compared with 90pc in the US. The rest is burned in gruesomely toxic home boilers or in small workshops, and this where the sledgehammer is falling. Beijing is phasing out coal boilers within the city limits." And: "Eight of the world’s biggest solar companies are Chinese. So is the second biggest wind power group, GoldWind. China invested $90bn in renewable energy last year and is already the superpower of low-carbon industries. It installed more solar in the first quarter than currently exists in France."

ISIS Gives Us No Choice but to Consider Limits on Speech (slate.com). The terrorists have clearly won, in other words. Let's abandon the Constitution.

A better idea: Avoid the Trap of Shallow Narratives (tm.durusau.net).

The Ethnic Unraveling of Yugoslavia and America (theleveller.org). A long, difficult read, full of painful parallels between Milošević and Trump (and to a lesser extent, Tudjman and Cruz). What's that you say? It could never happen here? Yeah. It wasn't supposed to happen in Yugoslavia either.

The U.S. Sends Out Its First Official Terror-Warning ‘Bulletin’ and Asks You to Stay Vigilant for the Next 6 Months (nymag.com). Please remain in a heightened state of tension until officials tell you to relax.

Promotion for NYPD Cop Involved in Shooting Death of Amadou Diallo — Shot 41 times in 1999 (nydailynews.com). Not a bug. Will not fix.

And in case you missed it (file under "He can never win, he's a socialist Jew who doesn't appeal to blacks"):

If you had to vote tonight & are a registered voter in the democratic primary, who would you vote for?
— deray mckesson (@deray) December 20, 2015

Yahoo Had a Party (motherboard.vice.com). "When I reached the actual party, the first thing I saw was CEO Marissa Mayer herself behind a series of velvet ropes, dressed in a long sequined gown and seated on a pure white arm chair. Attendees could sit next to her on an adjacent couch and pose for a photo." Meanwhile, Mayer is on track to make $365 million for five years of aggressive value destruction work at Yahoo.

Your Money or Your Breasts (WSJ). Actually, the (paywalled) story is called "How Pfizer Set the Cost of Its New Drug at $9,850 a Month," but the essence is, Pfizer is working tirelessly to make breast cancer as costly as possible for its victims. 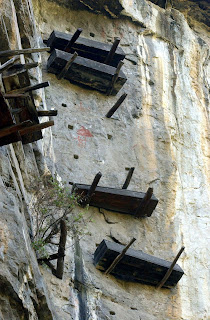 In China: 131 Ancient Hanging Coffins Discovered on Mountain Side (ibtimes.co.uk). The coffins (see photo, right) may be 1200 years old.

Tweaking the Beak: Retracing the Bird’s Beak to Its Dinosaur Origins, in the Laboratory (news.yale.edu). Essential quote: "Our goal here was to understand the molecular underpinnings of an important evolutionary transition, not to create a ‘dino-chicken’ simply for the sake of it," said Yale paleontologist and developmental biologist Bhart-Anjan S. Bhullar, lead author of the study. (A slightly more flamboyant writeup can be found here.)

Adolf Hitler Really Did Only Have One Ball (ibtimes.co.uk). The other is not in Albert Hall.

These are some of the stories that made at least one of my eyebrows go up, this week. Last week's report is here. Share the link? Thanks!