A perfect storm for turbocharging? 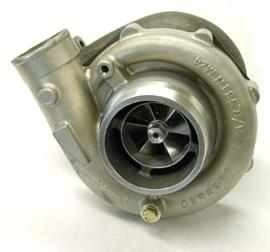 There's a new technology trend afoot in the auto industry that's going to arrive, bigtime, in a showroom near you, sooner than you think. It's a trend that's been brewing for years but now stands ready to gain truly historic traction. It's called turbocharging.

Turbocharged engines have been available on certain popular car models (such as the Volvo 70-series and Mercedes diesels) for decades. But now turbocharged engines are poised to make a major showing in auto (and light truck) lineups. The reason? Gasoline prices are on the rise, which means vehicle-buyers are increasingly conscious of the need for greater fuel efficiency. Until recently, achieving greater fuel efficiency has simply meant ordering a smaller engine. But to get the performance back, auto makers are now increasingly turning to turbocharging as a simple, bolt-on way to get more oomph while at the same time actually improving (rather than degrading) fuel economy.

It's not like the auto-makers have much choice. The U.S. government will be imposing much tougher mileage standards for 2016 to 2025 model years. New Corporate Average Fuel Economy (CAFE) targets are set to jump, in stages, to an average of 54.5 mpg by 2025 (an increase of about 50 percent from current levels). This sets an incredibly high bar for vehicle-makers who are already struggling to do all they can to reduce vehicle weight, improve engine output, and reduce emissions, all at the same time. The only realistic way to meet the new CAFE standards is to add turbocharging to existing engines.

Turbochargers are deceptively simple devices, in theory. What they allow you to do, in effect, is put an exhaust-gas-driven pinwheel in the exhaust system, with the "cold side" of the pinwheel coupled to a fan (a compressor) that blows air into the engine's intake system. This is no ordinary pinwheel, however. The turbine wheel in a modern turbocharger spins anywhere from 30,000 to 60,000 rpm (sometimes more), making it quite easily the fastest moving part in your engine. To last more than a few hours, the wheel itself must be made of exotic nickel-based superalloy that can withstand continuous exposure to high-temperature exhaust, and the entire assembly needs to be balanced to jet-engine standards, lest the whole affair suffer catastrophic spontaneous disassembly (engineering-speak for "an explosion") at operating speeds.

Only a handful of companies have deep experience in mass-producing high-output turbochargers. One of the oldest such companies is the former Garrett AiResearch (founded by Cliff Garrett in 1936), which was acquired by Signal Oil & Gas in 1968. Signal, in turn, merged with Allied Corporation in 1985 to form Allied Signal. The latter bought Honeywell for $15 billion in 1999, and although Allied Signal (at the time of the acquisition) was twice Honeywell's size, it chose to rename itself Honeywell International because of Honeywell's superior brand recognition.

Today, Honeywell Turbo Technologies is the division of Honeywell International that continues to produce the former Garrett line of turbochargers. It's easily the largest turbocharger manufacturer in the world, producing some 30,000 units a day (with plans to significantly increase that number later this year when Honeywell's new Slovakian plant comes online). Honeywell's three chief rivals in the turbo biz (Borg Warner, Mitsubishi Heavy Industries, and Ishikawajima-Harima Heavy Industries), put together, produce about the same number of turbos per year as Honeywell. So Honeywell is indeed the dominant player.

Currently, only around 5% of gasoline engines in the U.S. are turbocharged (compared to more than 50% in Europe). That share is set to grow to 20% by 2015 and could top 80% by 2020, according to Honeywell (in part because of the regulatory tailwind mentioned earlier). It's clear that Honeywell stands to see a significant increase in its turbocharger business in the coming years, even assuming motor-vehicle production remains constant. But vehicle builds have actually been increasing sharply of late. In the U.S., for example, the domestic auto build for 2012 is predicted to top 14 million (handily exceeding 2011's 12.8 million). If you combine steadily ramping vehicle production with a huge increase in market penetration for turbocharged engines, you have (potentially, at least) a home run for Honeywell.

Honeywell already has more than 100 OEM turbo applications in place (with companies like BMW, Caterpillar, Ford, and Volkswagen), with 500 new applications in the pipeline. This is a serious growth market for Honeywell, and it is already showing signs of becoming a huge moneymaker for the company. Turbochargers form the bulk of Honeywell's Transportation Systems Division revenues, and Honeywell (in its most recent 10-K filing) specifically credits its turbocharger business with that division's 16% year-over-year revenue growth, and 37% YOY profit growth. (By contrast, the company's larger and more mature Aerospace division is experiencing only 7% year-over-year growth.) The Transportation Systems Division accounts for a little over 10% of Honeywell's overall business, currently. But at current growth rates, it will soon be a much bigger share of both top-line and bottom-line revenues.

Is there a down side to the business? Not really. Even if fuel prices were to level out (or decline) over the next several years, government-mandated CAFE standards will still virtually guarantee that Honeywell will continue to see vibrant growth in its U.S. turbocharger business (all the more true when you consider that auto makers truly have exhausted their engineering bag of tricks when it comes to wringing more fuel economy out of today's engines). Going forward, turbocharging is a must, if CAFE standards are to be met. Pound for pound, turbocharging is the least expensive, easiest, most reliable way to get more performance and more fuel economy, simultaneously, out of an engine. No one seriously questions that fact.

Honeywell International (NYSE:HON) has recently been trading in the high fifties, with a 52-week range of 41.22 to 62.28 and a P/E multiple of around 25. The stock pays a dividend of 2.5% and is 80% institutionally owned. The most recent 10-K filing is here.

The author does not hold any position in Honeywell stock, nor the stock of its competitors.