The Comorbidity Crisis is not exactly a household word (yet), but I'm betting it will catch on. Multiple morbidity (presence of two or more medical conditions in a given patient at a given time) is increasingly common, and it's creating a kind of secondary health-care crisis of its own. 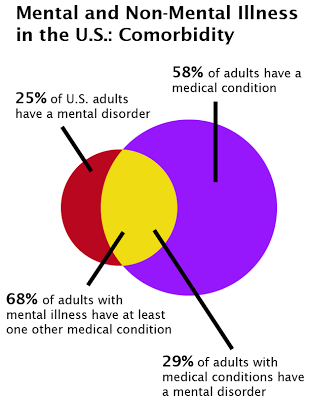 Approximately 75 million people in the U.S. have two or more chronic conditions, defined as "conditions that last a year or more and require ongoing medical attention and/or limit activities of daily living." [source] Some 65% of health care spending is directed at this 24% of the population. That's for the population as a whole. For the elderly, multiple morbidity is even more problematic. About 80% of Medicare spending goes to patients with four or more chronic conditions, with costs increasing exponentially as the number of chronic conditions increases. [source]

Multimorbidity is steadily getting worse over time, not just because the population is aging but because we're all getting sicker (or at least, showing up at the doctor's office with more complaints).


Less obvious is that comorbidity is spreading across various disease types that, in times gone by, wouldn't necessarily have been connected. Who knew, until recently, that gum disease had any connection to cardiovacular disease? Likewise, fifty years ago (when only 13% of the U.S. population was obese) there was no obvious link between being overweight and getting cancer. Today we know that there are statistically significant correlations between overweight (BMI greater than 25) and incidence of endometrial cancer, ovarian cancer, post-menopausal breast cancer, colorectal cancer, kidney cancer, and pancreatic cancer. [source] This is in addition to the well-known links between overweight and hypertension, stroke, coronary artery disease, pulmonary embolism, asthma, gallbladder disease, osteoarthritis, and chronic back pain.

Mental and physical morbidities lead from one to the other in subtle and not-so-subtle ways. Chronic physical ailments with a high "symptom burden" (e.g., chronic pain from arthritis) are often accompanied by depression. Depression, in turn, has been linked to altered immune function (including release of cytokines involved in inflammatory response), which opens the way to physical illness. If you're taking antidepressants, odds are high that you'll gain weight, putting you at greater risk of diabetes and the various cancers mentioned earlier. (One in six patients who take Zyprexa will gain more than 33 pounds in the first two years of use. [source] Moreover, all modern antipsychotics, according to Eli Lilly sales training literature, bring increased risk of diabetes.) It's a world of endless ripple effects.

One untoward outcome of multiple morbidities is polypharmacy, which leads to increased metabolic burden (toxic overload), drug compliance issues (forgetting to take pills), and adverse drug reactions (ADRs). One study found that the risk of ADRs was 2.65-fold higher in patients taking more than four drugs. But many patients take far more than four drugs. "If we apply the relevant CPGs to a 79-year-old woman with osteoporosis, osteoarthritis, type 2 diabetes, hypertension and chronic obstructive pulmonary disease, all of moderate severity," one researcher wrote, "the patient should be taking 12 different medications in 19 daily doses at 5 different times of the day" -- not counting any drugs to be taken "as needed."

The Morbidity Crisis is just getting underway. As DSM-V (due in May) expands the guidelines for mental illness, we're sure to see a continued sharp rise in mental/physical comorbidities; and as the population ages, we'll continue to see more people sick with multiple ailments, taking more drugs for more concurrent illnesses. The burden on the health care system will increase exponentially, and at some point, all of us will be poorer, not just in dollar terms but (very likely) in terms of basic health.

The winners in all this? Big pharma. You may want to buy some drug company stocks now. The really big profits are straight ahead.