BRAIN: A Penny for Your Thoughts

President Obama's kickoff of the BRAIN initiative was a major news item the other day. Widely lauded as the kind of program that can keep America at the forefront of science, Brain Research through Advancing Innovative Neurotechnologies (or, if you prefer, Big Ridiculous Acronyms Inspired by Nonsense) was compared to the Apollo moon program, which "gave us CAT scans" (the President said) and to the Human Genome Project, which altered economic reality as we know it by creating $140 in return for every dollar invested.

The President hailed BRAIN as "a bold new research effort to revolutionize our understanding of the human mind and uncover new ways to treat, prevent, and cure brain disorders like Alzheimer’s, schizophrenia, autism, epilepsy, and traumatic brain injury."

And for all this great knowledge, we're going to pay just $100 million (first year). 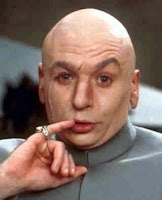 When I first heard the President mention the $100 million figure, I couldn't help thinking of Dr. Evil's demand for money in Austin Powers: International Man of Mystery:


Dr. Evil: Shit. Oh hell, let's just do what we always do. Hijack some nuclear weapons and hold the world hostage. Yeah? Good! Gentlemen, it has come to my attention that a breakaway Russian Republic called Kreplachistan will be transferring a nuclear warhead to the United Nations in a few days. Here's the plan. We get the warhead and we hold the world ransom for... ONE MILLION DOLLARS!

Did no one tell Mr. Obama, prior to the BRAIN press conference, that the National Institutes of Mental Health already spends $1.4 billion a year, of which $1.1 billion goes to research?

Does Obama not realize that the pharmaceutical industry spends $68 billion a year on research and development, much of it on brain research?

Did no one bother to tell Mr. President that between government and the pharma industry, there's been well over a trillion dollars spent on brain research in the last 20 years, and we're still not even close to understanding (much less curing) schizophrenia, autism, epilepsy, etc.?

Is our President not aware that the U.S. government spending another $100 million on brain research is like Bill Gates giving another fifty bucks to Ronald McDonald House?

Tomorrow, I want to talk, in depth, about an example of what real-world brain research (conducted with federal funding) costs. I'm going to talk about the STAR*D study, the most extensive (and expensive) single study ever conducted on the treatment of depression.