It's easy to understand why the first parity rule holds true, because complementarity of DNA strands depends on A pairing with T and G pairing with C; these pairings give rise to the "rungs" of the DNA ladder and ensure that copying of strands occurs with total fidelity during cell division. But there doesn't seem to be any a priori reason why the second parity rule should hold true. And in fact, it often doesn't hold true, as Wacław Szybalski noted in 1966 when he reported finding imbalances of purines and pyrimidines in bacteriophage and other DNA samples. Szybalski observed that in most cases, protein-coding regions of DNA tend to have slightly more purines than pyrimidines on one strand and slightly more pyrimidines than purines on the other strand, such that messenger RNA ends up purine-heavy.

If you're having trouble visualizing the situation, imagine a very short (12-base) "chromosome" containing 50% G+C content. One possibility is that one strand looks like GGGGGGTTTTTT and the other strand is CCCCCCAAAAAA. In this case half the purines (all the G's) are on one strand and half (A's) are on the other. But you could just as easily have strands be GGGGGGAAAAAA and CCCCCCTTTTTT. In this case, one strand is all-purines, the other all-pyrimidines. Both examples violate Chargaff's second rule, which requires that G = C and A = T within each strand (e.g., GGGCCCTTTAAA + CCCGGGAAATTT would obey the rule).


The above graph shows how this relationship works. To create the graph, I did a statistical analysis of codon usage in 93 bacterial species. Organisms were chosen so as to obtain representatives across the AT/GC spectrum. No genus is represented more than once. In order to get as broad a sampling as possible, I included 14 intracellular symbionts with ultra-low G+C content (plus one such creature—Candidatus Hodgkinia cicadicola—with a 58% G+C content); many extremophiles; heterotrophs and autotrophs; pathogens and non-pathogens; and organisms with large and small genomes. The complete organism list is presented in a table further below.

Codon usage statistics for each organism were obtained using tools at http://genomevolution.org. Relative prevalences of A, T, G, and C in the genomes' coding regions were determined by codon frequency analysis. The purine:pyrimidine ratio was simply calculated as (A+G)/(C+T) based on the codon-wise frequency of usage of each base.

What we see is that while there is a good deal of noise in the data, nevertheless it's quite clear that purine/pyrimidine ratios increase sharply as genome G+C decreases.Organisms for which Chargaff's second rule holds true (points falling at y = 1.0) are in a small minority. Most organisms have purine-rich coding regions, resulting in purine-rich mRNA.

Intra-codon base position analysis reveals that purine enrichment is far more concentrated in position one of the codon than other positions. The graphs below show the purine balance on a position-by-position basis, for each base in a codon. 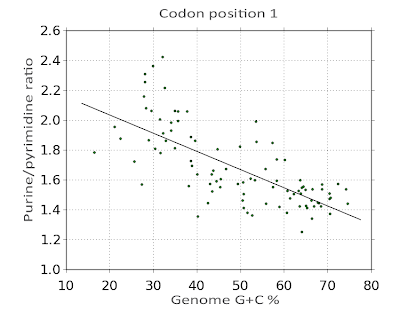 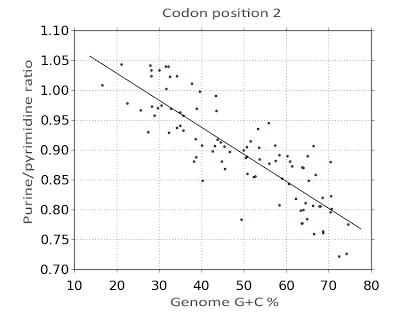 Variation in purine loading at the second position of the codon is more carefully controlled (notice that there is less "scatter" in this graph). The y-axis scale is different here than in the previous graph, hence the slope is quite a bit less pronounced than it looks. Also, notice that most of the points in this plot are below parity (i.e., below 1.0 on the y-axis), indicating that this codon position is relatively pyrimidine-rich. 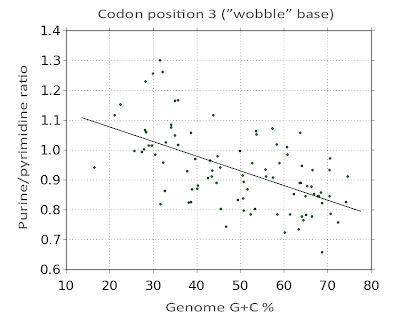 The third (so-called "wobble") position of the codon shows considerable variation in values, but the slope of the curve is less than in the previous two graphs, and this position is pyrimidine-rich for about two-thirds of the organisms.

What might those forces be? What kinds of selection pressure might cause organisms to purine-load one strand of their DNA? One possibility is that purine loading of the coding strand is a strategy for protecting the "weaker" or more vulnerable strand from damage or mutations. Cytosine is thought to be particularly vulnerable to deamination (and later substitution with thymine, during repair). It's possible that the transcription process (which is asymmetric, in that RNA polymerase operates against just one strand of DNA, leaving the other strand free) is protective of the antisense strand of DNA. That is, in transcription, RNA polymerase cloaks the antisense strand and in so doing renders that strand less vulnerable to deamination events, rogue methylations, etc., while transcription is taking place.

An entirely different possibility is envisioned by an RNA World hypothesis. In this hypothesis, the genetic material of early ancestor organisms was single-stranded RNA. Since single-stranded RNA is not "complementary" to anything, there is no need for it to obey Chargaff symmetries. Thus, purine loading could have occurred prior to the advent of double-stranded DNA, and early organisms could have been uniformly AT-rich. In this model of the world, GC-rich genomes are a late development, and the processes responsible for creating GC-rich DNA led to genetic material with full Chargaff base parity.

We may not know for a long time (if ever) what the mechanisms of purine enrichment are. But we know for sure that purine accumulation is a widespread phenomenon in the bacterial world (operating across diverse clades) and happens in a way that encourages purine-rich mRNA in organisms with low G+C content in their genomes.


Organisms used in this study: