Somebody, probably Syrian army regulars, maybe with a go-ahead from the highest levels of government (maybe not), killed 1400 people in Damascus using sarin gas.

International community: "Terrible. Just awful. A shame." (Then back to business as usual.)

United States: "How dare you! How dare you kill 1400 people with chemicals, when you could have killed them with bullets, the acceptable way! We are of course happy to stand by and watch you slaughter each other by the tens of thousands with bullets and mortars and cutlery. But bug spray? This is an outrage. You must now be punished, severely, with beautiful American-crafted $1.4 million cruise missiles by Raytheon, which will reduce your artillery, your planes, and your chemical slingshots to rubble. Of course, we will not actually destroy your chemical weapons, because that would only unleash obnoxious fumes and kill more people the Unacceptable Way. American Exceptionalism demands that we show you the proper, Acceptable Way of killing people. And we will do it soon, with our very large and suitably phallus-like missiles. We don't care how many women and children you place in our missiles' paths or the fact that even if they land in the desert and kill no one, you'll still show the world photographs of dead civilians 'killed by U.S. missiles,' thereby destroying whatever subatomic particle of credibility we continue to have on the world stage. This may be a lose-lose situation for us, but it is a lose-lose-LOSE-lose-lose-LOSE situation for those who dare to kill people with chemical fumes, even if many tons of ingredients used in the making of your chemical weapons came from our good friends in the UK." 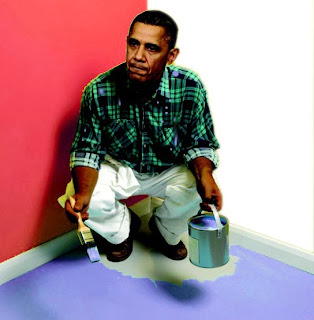 CIA: "And by the way, here are a few truckloads of guns and stuff you were asking for. Don't let them fall into the wrong hands. You know, people who might be hostile to the U.S.? You don't know anybody like that, do you?"

Bashar al-Assad: "I shall not dignify any of this with a response. Instead I shall affix my signature to a piece of your treaty-paper, and take my case directly to Charlie Rose."

Kerry: "Damn, the UK just caved in to the will of the people! What the actual fuck was that about? And it looks like we have some haters in the House who are going to obstruct us on this."

Lavrov: "Perhaps you have heard of a TV show, it was once popular in your country? Let's Make a Deel."

Obama (crouching in a corner, tentatively touching a finger to the floor, then to each wall, then the floor again): "Man, I thought this stuff would never dry. And the fumes are killing me."