Lately I've been reading a terrific book called Now Write! Screenwriting (2010, Tarcher/Penguin), edited by Sherry Ellis and Laurie Lamson. It's a collection of short (one to four pages long) tips from various successful screenwriters, presented in the form of exercises. In addition to practical advice on story construction, the tips and exercises are meant to help with ideation; hence the book is potentially of great help to any writer, in any form or genre.

I won't (can't) attempt to recap the book's tips here. If you're a fiction writer, go seek out the book, either at a bookstore or the library. You'll thank me later. 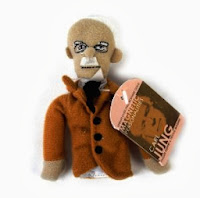 After reading a few of the essays in Now Write! Screenwriting, I started ideating. Here (below) is one idea that came to me. Warning: Not fully baked. Intake of half-baked ideas may lead to intestinal and/or intracranial distress. Consume at your own risk.

A twenty-something cubicle drone from Cupertino whom we'll call Tyler Schremp, having fallen into a deep existential depression triggered by the sudden passing of Cordelia, his pet chinchilla, decides to seek psychotherapy. He has had depression, episodically, all his life. In terms of therapies and meds, he's been through the mill. Nothing works. It's all palliative, at best.

Schremp gets a tip from a trusted friend of the family, a retired therapist, who recommends the "ultimate last resort," a therapy known as Bosonic Avatar Therapy, or BATTY, practiced by its developer, Dr. Egon Pringle. ("I understand BAT. But what does the 'TY' stand for?" Answer: "It stands for Thank Your lucky stars." "But in that case shouldn't it be BATTYLS?" "Look, do you want the therapy or not? It's just a goddam mnemonic.")

Schremp seeks Pringle out and finds him to be (how shall we say) a tad eccentric. But he comes highly recommended. Diplomas, publications, awards, etc. Pringle hands Schremp a puppet. "This is your starter avatar. It's rough, I know. It'll have to do for now. We'll get you a proper avatar, one that looks like you, soon enough."

Pringle explains that for proper disjunction of the subconscious anti-self, it is crucial that all therapy be conducted via the avatar. In other words, Schremp sits on a rug on the floor next to a couch, and he has to lay the puppet down on the couch and speak through the puppet. Pringle, in turn, produces a Freud puppet (with cigar) and speaks only through the Freud avatar.

The Freud puppet moves its mouth: "Please state your question through your avatar."

Freud-puppet: "My God, man, did you not take elementary physics in school? What the hell college did you go to? Surely you know that the universe is constructed, broadly speaking, of only two types of particles: leptons and bosons. Light and heavy. Electronics are leptons. That's what makes your brain work, electricity. Bosons are protons and other heavy forms of matter. Solid stuff. That chair. The rug you're sitting on. The air you breathe."

Freud-puppet: "This is why you need my help! You're not perceiving reality correctly."

Fast-forward a couple weeks. Schremp is now (under doctor's orders) carrying around with him, 24/7, a Schremp-puppet, 100% Schremp-like down to the Sad-Sacky sunken eyes, complete with a miniature iPhone in its pocket. Coworkers give him odd looks. When he needs to express his true feelings, Schremp has to use the puppet (avatar). The avatar mouths off to people. Schremp's supervisor at work is increasingly annoyed.

Schremp finds himself at a bar after work, wanting to drown his sorrows.

Schremp-avatar: "Do you serve ventriloquists here?"

"Well, I'll have a vodka martini, and my big dummy friend here will have a root beer."

"Make it a black Russian then."

A short distance away, at the bar, is a sullen-looking, nerdly young woman, sipping a pina colada. Next to her is a puppet replica of her, with a shot glass in front of it containing tequila and a rubber worm.

Schremp-puppet: "How's the Bosonic Avatar thing working out for you two?"

"We're fucking shit-faced, how do you think it's working out?"

When Dr. Pringle has decided individual therapy has gone far enough, he insists that Schremp and his avatar progress to the next phase: group.

And so it goes, until months later, Schremp (who has made little progress with his depression except that he has begun to write comedy routines in his spare time; but meanwhile he's increasingly suicidal) hears from Pringle, during a session, that his avatar is deeply disturbed and needs special therapy.

"Wait," Schremp-puppet says. "What are you saying? I'm just speaking through my partner..."

Dr. Pringle's Freud-puppet, to the Schremp-puppet: "Partner schmartner. YOU are now the patient here, your partner is fine. YOU, I'm deeply concerned about. You need intensive therapy, immediamente. ¿Comprende? Don't make me Baker-Act you."

"The Baker Act is only in Florida."

"Nonsense! I can commit you both to an instutition, right now, if that's what you want."

"All right, all right. What are you suggesting, exactly?"

Dr. Pringle, through his puppet, hands Schremp a card.

"I want you to see this man. He's an eminent puppetologist, the best in the city."

"Yes, your avatar is in serious need of deep Contrabosonic Therapy, CBT. I'll make the appointment for you right now."

Dr. Pringle tries to dial a number with the Freud-puppet. When it doesn't work, he tosses the Freud puppet aside and the puppet's lit cigar starts a fire on the desk.

Eventually, Schremp ends up in the office of a Dr. Yung, who operates a Jung puppet. This time, the Schremp puppet sits on a rug while Schremp lies on a couch. Schremp must pretend that the rug puppet is a ventriloquist making him speak.

Now obviously, the story needs a lot of work. The nerdy-girl has to figure into Schremp's life in a big way and there need to be additional minor characters (a best friend, someone in the office who's a friend, maybe an ex-) who can help steer Schremp through the madness that's become his life. Maybe at the end, the bartender whips out his bartender puppet and offers some poignant advice, the kind you can only get from a bartender-puppet.

I'll see how far I can take it. For therapy's sake.