On a trip to my favorite bookstore, Chamblin's Bookmine in Jacksonville, Florida, I happened across a copy of a book called Confessions of a Sociopath: A Life Spent Hiding in Plain Sight (Crown, 2013), by a woman writing under the pen name "M. E. Thomas." I bought it partly because I'm a sucker for any kind of memoir, and partly out of curiosity. I wanted to see which parts of the book, if any, resonated with me. 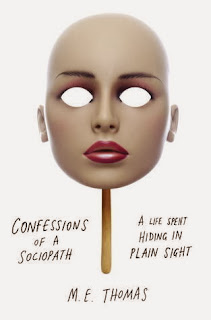 It's impossible to read a book on sociopathy (or any other psychological condition, really) and not have some part of it resonate. One hears statistics like "sociopaths make up 1% to 4% of the population"; but in truth, sociopathy is not an all-or-nothing diagnosis. We all fall somewhere on a continuum between "normal" and "outside the norm." There is no magic boundary on the continuum that, once you cross it, makes you a sociopath or makes you a psychopath or makes you anything in particular. We may want to believe we're able to slot people into neat categories, but reality is not so crisp and binary.

Truth be told, sociopathy is one of the least crisp ideas in all of psychology. There is still debate over how best to distinguish psychopathy from sociopathy (the two are often conflated), and there was much disappointment among clinicians when the recent revision to the Diagnostic and Statistical Manual (DSM-V) failed to include any substantive clarifications in the description of Antisocial Personality Disorder, which is defined according to the following:


A) There is a pervasive pattern of disregard for and violation of the rights of others occurring since age 15 years, as indicated by three or more of the following:
B) The individual is at least age 18 years.
C) There is evidence of conduct disorder with onset before age 15 years.
D) The occurrence of antisocial behavior is not exclusively during the course of schizophrenia or a manic episode.

The age cutoffs are, of course, completely arbitrary and artificial (and thus silly), and the whole definition reads like the committee-brewed dreck that it is.

If you happen to meet the above criteria, bad news: There's no pill you can take to get better (although you can rest assured, drug companies are trying to connect serotonin reuptake to ASPD in various ways as we speak). But that's okay, because if you're a true sociopath, chances are you're not interested in "getting better" anyway. In fact, you may well be a highly functional, productive member of society. (Notice that you don't actually have to be a lawbreaker—or even antisocial—to meet the DSM criteria for  ASPD. You might simply be impulsive, grumpy, and reckless.)

Sociopaths tend to be charming, confident, perceptive, resourceful people who are good at "gaming the system," whatever system it happens to be. They're canny and cunning. They're manipulators and users with a deep grasp of situational ethics, who often go far in their careers. Look around you. Sociopaths are running major corporations; armies; legislative bodies; movie studios; nations. These people are running the world.

As ill-defined (and dated; see graph above) as sociopathy is, it's a concept that resonates strongly, because it's so familiar. The TV show Dallas was a hit because of the starkly sociopathic machinations of its characters. Indeed, most of Shakespeare still resonates because of the chill of recognition caused by characters like Hamlet or "honest Iago" in Othello. Every memorable vampire character in literature is the embodiment of sociopathy. (Dracula was charming to a fault, supremely adept at giving the appearance of sincerity, yet also a heartless, self-centered, calculating, dispassionate killer.) Sociopaths and drama go hand in hand.

Western capitalistic society is rooted in predatory economic behavior (profiting off others)—there have been many articles in professional and lay journals comparing corporations to psychopaths—but it would be a mistake to believe sociopathy is not cross-cultural. The Chinese concept of Thick Black Theory goes back more than 100 years. In Europe, Machiavelli wrote extensively about sociopathy in the 1500s. (Many of Machiavelli's precepts have precedents in Greek literature; Machiavelli himself cites Xenophon extensively.) Harvard anthropologist Jane Murphy reported in 1976 that the Yoruba tribe in Nigeria had its own word ("arankan") for sociopathic individuals. Whatever sociopathy is, it's been around a long time and can be found in many cultures.

One of the more interesting insights provided by M. E. Thomas in her confessional book is the notion that sociopaths typically have a poorly defined sense of self, or at least a highly protean self-construct. (At one point, she uses the term "shape-shifters.") This partly explains how sociopaths are able to dodge feelings of remorse or personal responsibility. But it also means sociopaths are likely to score high on a test for sociopathy one day and lower on the same test another day. And it aligns with the idea that certain specific social situations might bring out the latent sociopath in a person, whereas other social situations might bring out the same person's "normative" side.

As if  to prove her worthiness of being called a sociopath, M. E. Thomas, in her book, goes beyond telling of her official diagnosis (including suitably damning scores on the PCL:SV and other tests; you can try one of these tests online here) to relate, in detail, a number of personal escapades involving unscrupulous (or at best, ethically questionable) behavior: stealing (but then returning) a bicycle, letting a baby opossum drown, inserting herself in other people's romantic relationships (for the express purpose of scuttling someone's budding romance), manipulating coworkers, bringing charges against teachers, etc. (Chapter 7 of the book is devoted to Ruining People.) After you read enough of her exploits, you'll be duly revolted by them (or maybe not, if you're a sociopath yourself). If you want more, you can always go to the author's website, sociopathworld.com. You can also see a video of "M. E. Thomas" (wearing a blond wig) on the Dr. Phil show here. (The link was live at this writing. Who knows how long it will stay up, though.)

Since M. E. Thomas is a fan of ruining people, I'm sure she won't mind me revealing her real identity here. The sociopathworld.com website is registered to Jamie Lund, who is apparently the same Jamie Rebecca Lund (see photo, right) that taught law at St. Mary's University in San Antonio until recently. (Her identity was pegged last May by Elie Mystal at AboveTheLaw.com.) I'm in no way trying to ruin Ms. Lund, however. She's fully capable—as most sociopaths are—of doing that on her own.