I found the graphic below in David McCandless's book Information Is Beautiful and felt it was worth sharing; I couldn't stop looking at it. Click to enlarge. 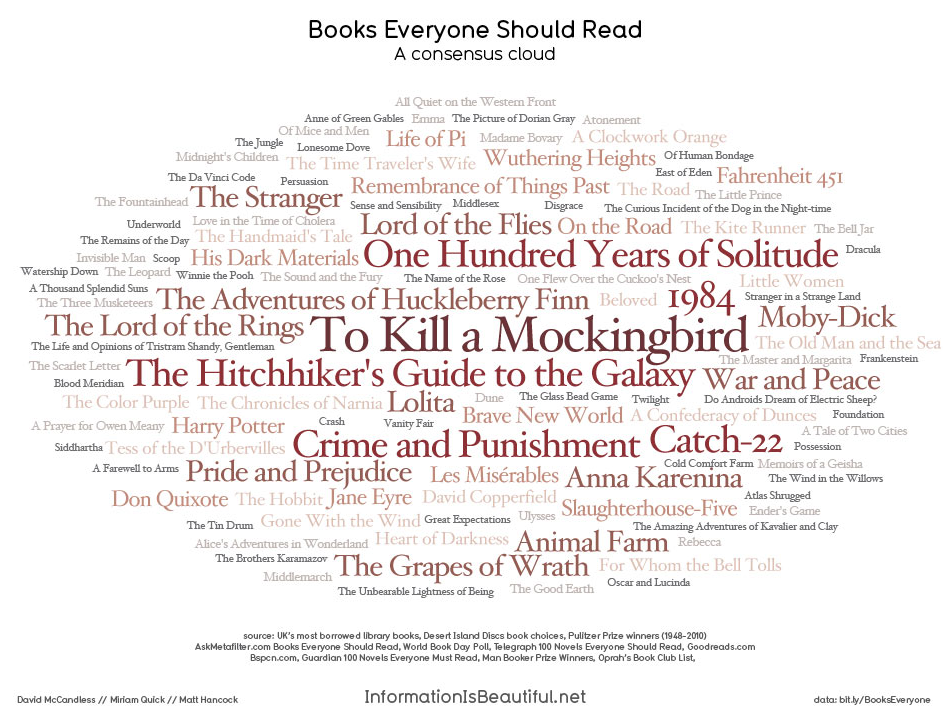 Sad to say, I've read shockingly few of these titles (maybe twenty percent of them?). Some, I read at too early an age and remember dimly. Most of the ones I did read do, IMHO, deserve to be on this list. I take issue, however, with The Da Vinci Code (an execrable dung-pile between two covers) and have to wonder why The Chronicles of Narnia made the list but Gravity's Rainbow didn't. Certainly Catch-22 deserves its prominent position in the word-cloud, but does the turgid Dune (look to the right of Lolita) deserve to displace The Road or [pick your favorite dystopian epic]? Does Stranger in a Strange Land (a wooden, laughably kitsch fable about a man from Mars) even hold a candle to a book like Flowers for Algernon? Does Ayn Rand rate not one, but two placements (for The Fountainhead and Atlas Shrugged)? Really??

Of course, David McCandless did not choose the items on this list. No single person did. It was drawn from Oprah's Book Club List, Goodreads.com, and other public sources. (Read the fine print at the bottom.) Garbage in, garbage out. Still, as infographics go, and considering how many word-clouds all of us (by now) have seen, it's surprisingly compelling.