The Internet Has Killed Prosperity as We Know It

In a post called Where Is the Internet Boom?, Princeton economics student Evan Soltas tries to determine (mostly with GDP data) how economies have benefitted, in a macro sense, from the incredible productivity increases wrought by the Internet. Not to issue spoilers, but: Soltas finds no evidence of an "Internet Boom." None whatsoever.

You'd think all the happy talk (by people like Google's Eric Schmidt, and generations of IT bigwigs before him) about the immeasurable benefits attendant to connectivity would inevitably come with some sort of proof. You'd think prosperity would show up somewhere, somehow, as a result of something as stupendous as the Internet. Instead, what we have in the U.S. is a more-educated population working longer and harder for flat-to-miniscule wage increases. Facebook, Apple, Google, and other technology-leadership companies routinely export jobs out of the U.S. (not just menial factory-work jobs but the good jobs we're always told by politicians we can look forward to if we major in technical subjects). The menialization of U.S. jobs—a process that began well before the financial collapse of 2008—has made us into a nation of floor sweepers and Starbucks baristas, and unless you're a bigtime economic-reality denialist, it's pretty damn clear that the Internet Era has (oh how miraculous!) just happened to coincide with the appearance of monumental wealth disparity around the world. Three billion people now make less than $2.50 a day, while the number of billionaires in the world keeps increasing. 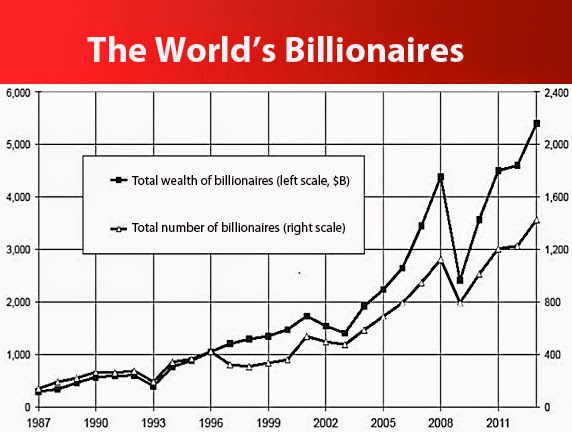 Note that the billionaire curve took a sharp increase in slope well ahead of the 2008 collapse, pausing only briefly after 2008 before resuming its sharp upward trajectory.

It's pretty evident that if you wanted to use economic data to show that the Internet is driving us toward a future of servitude and class warfare, it wouldn't be that hard to do a dissertation on the subject. (Left to the reader as an exercise.)


Great post. What I think history will eventually show is that the Internet destroyed far more economic activity than it created, by devaluing human labor (and expertise) and enlarging workforce markets from essentially local, to global, so that the "cheapest bidders" from around the globe are now a part of every labor market that can utilize remote workers. These effects have resulted in what NakedCapitalism.com and others have called the crapification of U.S. jobs (every good job that can be exported will be, or has been) and the creation of a nation of Walmart greeters. The Internet has also, of course, expanded supply chains globally, an effect that is still playing out with the collapse of oil prices (which will soon make container transport "too cheap to meter"). Meanwhile, Google and Facebook and others continue to appropriate, and profit immensely from, personal browsing data, using said data to enrich themselves without enrichng or hiring workers. Very few knowledge workers are lucky enough to get a job with Google (or any similar company); Facebook, meanwhile, famously exports jobs to cheaper labor forces. (FB streams are hand-censored by armies of low-cost workers in the Philippines.) It's a myth that the Internet has created, or would ever create, prosperity on a large scale. What the facts show is that it has created the most monumental wealth disparity in the history of the world.

Amazon has decimated malls all over North America. The Internet has put countless magazines and newspapers out of business (and gutted the printing industry, front to back). It has killed traditional film photography (Kodak a burned-out hulk); killed album-based music; killed the U.S. Postal Service; killed tons of small businesses; and by broadening access to overseas sources of supply, it has helped kill U.S. manufacturing generally.

But it's worse than that. Any answer to any question can (in theory) be looked up online, hence expertise has been fundamentally (and forever) devalued, rendering the idea of a "knowledge worker" somewhat comical and the dollar value of a college education questionable, to say the least.

John Maynard Keynes speculated nearly a century ago that by the year 2000 we'd all be working 15-hours weeks with our feet propped up. He'd probably be horrified to know that today, 14.5% of Americans live in poverty and 49.1 million citizens of "the world's bread-basket" live in food-insecure households; meanwhile 86% of men and 66% of women in the U.S. work more than 40 hours a week. The statistics are clear, abundant, and (thanks to the Internet) easy to find, and they pretty much show prosperity (by any rational definition) nose-diving since the introduction of broadband.

The Internet Era coincides with unprecedented wealth disparity, worker exploitation, business disruption, and (for many) outright privation. You can call it all one big fat coincidence if you want (if you're that blind). Whatever it is? It sucks for a lot of people.