How to set your head on fire 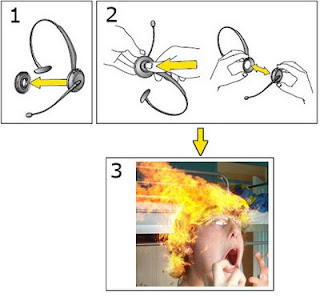 The folks at Jabra (the Danish headset manufacturer) are having a product recall. It seems Jabra's lithium batteries can overheat and catch fire. According to the company's announcement:

Dear Jabra GN9120 Customer
In cooperation with the Danish Safety Technology Authority (Sikkerhedsstyrelsen) and the U.S. Consumer Product Safety Commission, and other regulatory agencies GN Netcom is voluntarily recalling Lithium-ion batteries from ATL (ATL P/N 603028) used in GN9120 wireless headsets and sold from January 2005 through September 2008. These lithium-ion polymer batteries can overheat due to an internal short circuit in the batteries, which can pose a fire hazard. The battery has only been used in the GN9120 wireless headset. If you are using any other headset solution from GN Netcom you are not affected by this statement.

Not to worry, though. The "extra-crispy" look is in.