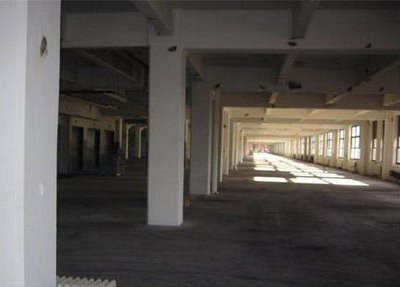 The NYC Google office takes up a city block.

Word comes by way of the Silicon Valley Insider that Google will soon be subletting 50,000 square feet of space at its New York City Googleplex. I've toured the place, and let me tell you, it's Big: the 111 8th Ave office occupies an entire city block of space, between 8th and 9th Avenues and 15th and 16th Streets. It's around 300K square feet altogether.

What kind of luck Google will have subletting this space in the current economy, I don't know. It's very inconveniently located, in the meat-packing district, a couple miles south of Grand Central Terminal and just far enough from the Village to be annoying.

From what I saw on my walk-through, I can tell you that Google tends to be rather wasteful of space, by industry standards. The cafeteria is the size of Macy's and there's one conference room for every three employees (well, almost), and very few programmers can actually reach out and touch someone despite the lack of walls. I'd say there has to be an average of at least 500 sq. ft. per employee by the time you factor in all the conference rooms, hallways, etc.

So there's only two possibilities. Either Google will try to use its space more efficiently (and not lay anyone off) at its NYC office after subletting one-sixth of its available space; or it will lay off a sixth of its Manhattan workforce (around 120 people). Or some combination of both.

My guess is both.