What Happens to Greece Now?

A couple of comments, as if any more were needed, on the Greek situation. 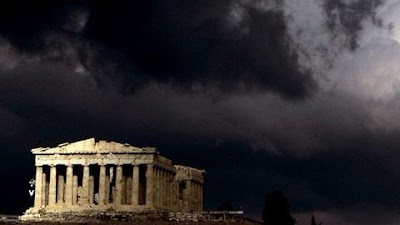 First, the creditors are strongly motivated to put in place a stopgap relief measure specifically designed to last six months, because this postpones the next phase of the crisis to just beyond the late-2015 Spanish general elections. The creditors want to avoid, at all cost, any action by Greece (over the summer) that could prove emboldening to left-wing political elements in Spain. It wouldn't be good for the neoliberal creditor agenda if, for example, Greece were to veer into default and immediately begin to make visible progress on its problems. The Germans would much prefer to keep Greece in the sweatbox between now and Christmas, as an example to other countries.

A second thing to keep in mind is that government spending, in Greece, is 60% of GDP. (By contrast, it's only 22% of GDP in the U.S. and around 44% of GDP in the U.K.) Therefore, any austerity measure that results in reduced government spending will impact GDP directly. This means it is probably impossible for Greece to embrace austerity (e.g., pension cuts) and grow its GDP meaningfully. One precludes the other.

Another thing to keep in mind is that the creditors' "Plan B" is regime change in Greece. The creditors are assuming that in the event of a breakdown, a new government will arise (one that's easier to bargain with).

Note that the bank run (which has been well underway for weeks) was probably a deliberate action by Greece to get as many physical euros in circulation as possible ahead of a prolonged IMF arrears process and an IOU economy.


This week, we'll either see a miraculous new last-minute bailout, or we'll see a bank holiday, perhaps followed soon thereafter by introduction of an IOU system or alternate currency. Once cash is blocked (and a system of IOUs is in place), Greece will be in a Schrödinger-cat state, neither fully in the euro nor in a state of exit. To quell fears of a breakdown in the euro, ECB would probably instruct the central banks of core countries to cross-purchase peripheral state bonds (to mutualize risk) in an effort to prop up bond prices while demonstrating minimal convertibility risk. Whether this would be enough to stabilize bond prices overall (e.g. keeping Italian and Spanish bond yields below 4%) is anyone's guess.

If full-on Grexit occurs (later in the summer), the Eurozone countries would no doubt take steps to shore up the euro system, for example with a scheme for area-wide bank deposit guarantees, and/or a euro-area Treasury, and/or collaboration on Eurozone fiscal initiatives (as opposed to purely monetary initiatives). The emphasis will be on not allowing "another Greece."

UPDATE [Noon East Coast US time 22 June]: My sense is that the creditors will accept a less-than-optimal deal with Greece (but will call it "acceptable progress"), to push the next crisis-point past the Spanish elections. The creditors can accept a less-than-perfect deal at this point and come off looking generous and beneficent (even though they are destroying Greece for their own gain). Another short-term deal cannot be good for Greece, though, since it only drags the economy down further and worsens the risk of default. In many ways, a six-month "reprieve" is actually the worst possible outcome, for Greece. Kicking the can down the road means we revisit this crisis over and over again.