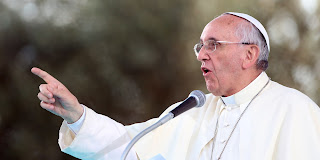 Pope Blasts Capitalism (and Austerity!) in Lengthy Speech (reuters.com). "Let us not be afraid to say it: we want change, real change, structural change," the Pope said, decrying a system that "has imposed the mentality of profit at any price, with no concern for social exclusion or the destruction of nature." Francis also warned: "The new colonialism takes on different faces. At times it appears as the anonymous influence of Mammon: corporations, loan agencies, certain 'free trade' treaties, and the imposition of measures of 'austerity' which always tighten the belt of workers and the poor."

Corporate Capitalism Is the Foundation of Police Brutality and the Prison State (alternet.org). Chris Hedges with an important reminder that neither police brutality nor justice-system profiling will be solved by a debate over “acceptable use of force.”

Microsoft Tallies the True Costs of the M&A Boom: Layoffs, Write-Offs, Shut-Downs, and Economic Decline (nakedcapitalism.com). A fine piece by Wolf Richter, with a great intro by Yves Smith. Well worth a look for added detail on the Microsoft layoffs. (My title for the piece would have been: "How to Make a Small Fortune in Mobile: Start with a Large One.")

A Cyber Attack on the U.S. Power Grid Could Cost $1 Trillion (reuters.com).

Warren and McCain Reintroduce Glass-Steagall (samuel-warde.com), the act that, until Bill Clinton signed its repeal, forbade savings banks to be casinos investment banks.

Commonly prescribed drugs affect decisions to harm oneself and others (medicalxpress.com).

Scientists Reveal Death Toll Caused by Sugary Drinks (themoderatevoice.com). You can pooh-pooh the numbers if you want. You can blame the victims too. It doesn't make the problem any less severe.

Hackers Take Over Patriot Missile Battery (thelocal.de). This is not a drill.

Net Neutrality Has Led to Slower Internet Speeds for 75% of U.S. Customers (theguardian.com)

2015 on Pace to Become Hottest Year on Record (weather.com). An inconvenient fact for Republican (and other) climate-change deniers.

One in Four British Tech Companies Has No Female Executives (thinkprogress.org).

For the First 9 Months of FY2015, the U.S. Ran a Budget Deficit of $315 Billion (econintersect.com), almost as much as Greece's total accumulated debt.

Ever Wonder Why Gold Prices Are So Soft? (paulcraigroberts.org). Chicanery, pure and simple. Or at least, pure.

Government Spending Accounts for 48.1% of GDP in EU Countries (ec.europa.eu), which is why austerity doesn't work: it crushes GDP immediately.

And not to toot my own horn or anything, but do you remember June 24, some 400+ DJIA points ago, when I said:

Join us here every week for inappropriate freakonomic news of the weird and wonkish!

Meanwhile, a big THANK YOU to the following great people who retweeted me yesterday: