Trump is popular because Americans are angry (wonkwire.com). And anger makes you do things you're not proud of later. 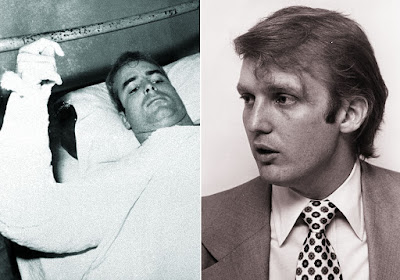 What Donald Trump was up to while John McCain was a prisoner of war (WaPo). Lest we forget.

I gave up Ayn Rand for Bernie Sanders: How I grew up and traded libertarianism for a progressive “socialist” (salon.com). I wish this article had been longer. I, too, started out an Ayn Rand fanatic (decades ago, when she was hitting on Nathaniel Branden) and ended up, well . . . where I am now.

CO2 emissions are dropping not due to good policy, but economic recession (rawstory.com); or at least, that hypothesis is, in fact, supported by new research.

Woman recruited by Google four times, and rejected each time, joins age discrimination suit (computerworld.com). The median age of a Google employee is 29. It's a youth culture, plain and simple. I saw it on my own in-person interview there. (At age 56, I sure as hell didn't get the job.)

LA police discover arsenal of 1,200 guns in dead man's home (theguardian.com). Police found the 1,200 guns and two tons of ammunition "after the man’s decomposing body was found in a car down the street from his home in the Pacific Palisades neighbourhood." UPDATE: Bob Smith (the dead man) had told fiancée he was "an undercover operative for the government."


Numbers Needed for the Prime U.S. Workforce to Recover (econintersect.com). "The charts above offer strong evidence that our economy is in the midst of a massive structural change. The three mainstream employment statistics — unemployment, labor force participation and employment-to-population — all document an ongoing economic weakness far deeper than the result of a business cycle downturn."

Why We Hate Poor People (dailydot.com). Because the reality that poverty is not a choice anyone makes voluntarily collides with our childish devotion to the idea that capitalism is a meritocracy. (Duh.)

NYPD Commissioner Bill Bratton wants "resisting arrest" to be a felony charge (observer.com) because obviously, only a felon would resist arrest, right?

Austerity is the New Auschwitz (this blog). I changed the title. It used to be "Greeks Are the New Jews."

R.I.P. Alex Rocco (avclub.com), aged 79. Was best known for his unforgettable portrayal of mobster Moe Greene (shot in the face at the restaurant) in The Godfather.