As we look into next week, two things need to be watched closely. 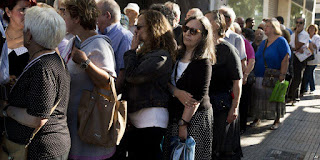 The need for banks to reopen is a humanitarian issue, plain and simple. People will soon be without basic necessities. If a man is dying of thirst, you do not withhold water from him in order to negotiate the price of cups—unless you're a sadist.

The ELA cap needs to be raised immediately so the banks can open and remain solvent. This is a state of emergency. ECB has to choose now between coming to the aid of one of its own (assuming Greece is truly a coequal among Eurozone members), or turning its back on Greek banks, in effect declaring Greece a leper.

The mere fact that anyone should have to speculate on what ECB will do now with regard to Greek banks is horrifying. It suggests some EU members may be more equal than others. It suggests that "mere humanitarian concerns" might be less important, in an emergency, than satisfying the bookkeeping needs of creditors. One might fairly ask: What good is a monetary union in which emergencies of this sort happen at all, let alone play out in this unsavory fashion?


Meanwhile: talks with creditors need to resume quickly and under terms that are realistic. IMF has redefined "realistic" with its famed Debt Sustainability Analysis (DSA; PDF here), which shows that Greece needs a grace period of 20 years and amortization extended to 40 years (p. 12, item 10, IMF DSA), possibly in conjunction with writedowns or haircuts on key debt components (p. 15, DSA), plus the ability to borrow at AAA rates (p. 10 item 5). ECB can no longer argue that such demands are unreasonable, since Greece can cite the IMF analysis now. IMF has unwittingly entered the role of third-party arbitrator. It has provided an independent review of the Greek finances and concluded that more concessions are needed not just from Greece but from ECB.

IMF has done us all a great service here by providing transparency into what had been, for far too long, an opaque situation. We will now be able to tell, very quickly, whether ECB is negotiating in good faith, or resorting to chicanery. If it dismisses the IMF report, it sends the wrong message to the world—and opens up a rift with the IMF, declaring it incompetent.

But first we have to get to the negotiating table. Here again, ECB will show its cards fairly quickly. If the Germans invent all sorts of new procedural and other reasons why they cannot return to negotiations, if they drag their feet after the referendum, it will be obvious that they are trying to scuttle (not help) Greece. And again we'll have to ask: What good is a monetary union in which this sort of unhelpful acrimony occurs? Why should Greece or the UK (or any country, really) participate in such an arrangement?

As soon as possible, ECB representatives need to acknowledge, in a highly public way, the validity and reality of the IMF debt sustainability analysis and their willingness to return quickly to negotiations, in a spirit of cooperation, not acrimony. The adversarial posture needs to cease. Otherwise, it's clear (if it wasn't already) that the common-currency project has no future.

When the 21 creditor nations forgave 62% of West Germany's Marshall Plan debts in 1953, they did so on the assumption that the German people were worth helping; that their former political leaders (the Nazis) were in no way representative of the nation itself; that the new leadership would prove worthy, going forward. Germany today needs to make some of the same assumptions about Greece, and approach the coming negotiations in a conciliatory, generous, forgiving spirit—not lapse into brutish, inhumane, thuglike behavior; behavior that wasn't worthy of Germany in 1940, and isn't worthy of that great nation today.

I want to thank the following very kind individuals for retweeting me yesterday: