Austerity is the New Auschwitz 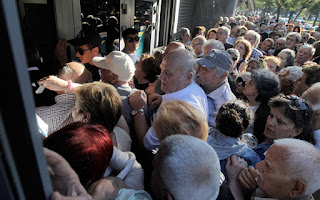 So before anybody starts saying things like "Germany believes XYZ" or "Greeks say ABC," we should stop and remember that the current crisis is really, first/foremost, a crisis of leadership. It's the leaders of these countries who got the countries into their respective binds. It's worse than that, though. It's not just the political leaders. It's the bankers and IMF and Eurozone functionaries, many of whom were not elected and have no political legitimacy whatsoever.

One of the enduring tragedies of the human condition is that elected (and unelected) leaders so often end up pursuing policies that result in misery and death, on a massive scale, for millions of citizens who didn't vote for war, didn't vote for genocide, didn't vote for privation, starvation, dislocation, etc., yet got it anyway, because of bad leadership.

So when I say Germany is involved, today, right now, in an extensive, slow-motion, seemingly bloodless (but actually quite violent) project of economic genocide involving the Greek people, one thing I don't mean to suggest is that the citizens of Germany, today, advocate starving anyone to death, depriving anyone of medicines, inducing suicides, dislocating families, stirring civil unrest, usurping democratic rule, etc. That's obviously not the case.

Even so, let there be no mistake: We are witnessing the continuation of World War II, a post-modern/post-war war, conducted by economic means, by German technocrats intent on subjugating a sovereign people. It's a campaign of coercion, using (as Varoufakis said) banks, not tanks.

It all goes back to the Jewish Problem, but it's not a simplistic matter of stereotypical Hitleresque Judenhass. It's more nuanced.

Slovenian philosopher Slavoj Žižek, in Interlude 2 of Living in the End Times, explains the protean nature of Judenhass (Jew-hatred) as follows:


[Jews] are stigmatized as both upper class (rich merchants) and as lower class (filthy), as overly intellectual and as too earthly (sexual predators), as lazy and as workaholics. Sometimes they stand for a stubborn attachment to a particular lifestyle which prevents them from becoming full citizens of the state they live in, at other times for a "homeless" and uprooted universal cosmopolitanism indifferent towards all particular ethnic forms. The focus changes with different historical epochs. In the era of the French revolution, the Jews were condemned as being overly particularistic: they continued to hold onto their identity, rejecting the possibility of becoming abstract citizens like everyone else. In the late nineteenth century, with the rise of imperialist patriotism, this accusation was turned around: the Jews were now considered all too "cosmopolitan," lacking all roots.

So depending on what you want to hate (no matter what it is), it's possible to hate the Jews for it. Hence, it's obvious that the Jew is really (beyond anything else) a proxy for the generic Other. This goes to what Žižek means when he says "anti-Semitism is not just one among ideologies—it is ideology as such, κατ' ἐξοχήν" (par excellence).

The prototype of the shiftless, scheming, itinerant, undisciplined, untrustworthy constitutive Other is now, of course, the Greek. The Greek is the new Jew.

German Finance Minister Wolfgang Schäuble has made countless statements about Greek leadership's mendacity, irresponsibility, lack of trustworthiness, lack of discipline, the Greeks' unwillingness to stop "living beyond their means," etc. The insults reached a point, last March, where the Greek ambassador in Berlin felt the need to present a formal démarche to the German Foreign ministry, alleging that Herr Schäuble made derogatory personal comments against Greek Finance Minister Yanis Varoufakis (in a meeting for which no minutes exist). An unapologetic Schäuble dismissed the accusations as "nonsense."

But it's not just Schäuble. Bild articles on Greece are full of derogatory slurs such as “bankrupt Greeks”, “Greek profiteers,” and “Extremos of Greece.” The German press has built an extensive mythology around Greek shiftlessness and entitlement, going back years, if not decades.

Bernard-Henri Lévy presciently foresaw that the new anti-Semitism would wear a "progressive" face, but one wonders if he saw beyond it, to a post-ideological anti-Semitism that transcends the merely Semitic? What could be more "progressive," more evocative of the erasure of history, than the ideal of a modern European Union? And what could be more dangerous to such a generic, history-unencumbered union than an ancient culture, deeply committed at the level of its very identity, to the traditions of ανεξαρτησία (independence) and δημοκρατία (democracy) ? It's not necessary to accept Jean-Claude Milner's view of Europe as having conveniently exported its "bad luck" (the Jews) to a separate nation (Israel), post-WWII, in order for one to appreciate EU's newfound eagerness, under German and Dutch leadership, to ring-fence its new "bad luck" (the Greeks—the new Jews) in an island-based slave-labor camp (Greece), kept in check by perpetual austerity (amounting to economic, if not also actual, starvation). Herr Schäuble's advice to Greece, from the start, loosely translated, has always been Arbeit macht frei. Stop living beyond yours means. Work. Sacrifice. Pay. Redeem yourself. Or else we crush you.

We see a familiar, disturbing template here. But there is nothing uniquely German about the worldwide trend toward Mittellosenhass (hatred of the poor) that finds expression in the criminally insane austerity programs of a kleptocratic elite that now controls the world's parliaments, congresses, election processes, laws, courts, trade agreements, and treaties. "Arbeit macht frei" is, in fact, also the subtext of such absurdities as the recent legislation prohibiting Food Stamp recipients from buying shellfish, the $25 cap on ATM withdrawals for welfare recipients in Kansas, charging court costs to defendents for petty crimes, and countless other punish-the-poor schemes that seem to multiply by the day, in the U.S., making Greeks (neo-Jews; untouchables) of all of us. 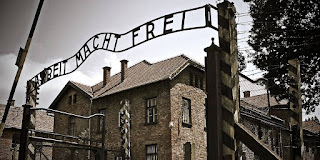 The objective of Greek debt "negotiations" vis-à-vis the ECB was never to find a path to sustainability, a route to Greek financial independence; it was always, in fact, the exact opposite. It was (and remains) the Eurogroup's goal to obstruct and prevent debt sustainability, so as to scapegoat, subjugate, and ultimately destroy the irredeemably unclean Other whose continued profligate ways threaten a unification project that depends on compliance, conformity, abandonment of history, and (above all) fiscal discipline that suitably strengthens and perpetuates the unified field of Kapital.

Capitalism's "constitutive Other"—the indigent; the uncompetitive; those who cannot succeed on their own in a free market—the Greek—must be contained, quarantined, and if possible, killed off, or at least discouraged from multiplying. (How often have we heard the language of disease used in discussions of Greece: contagion, infection, "malaise" that "spreads," immunity, inoculation, etc.? How often did the Nazis use similar terms in describing Jewishness?) Of course, the modern face of fascism is suitably technocratic and antiseptic, maintaining a pretense of non-violence; the waterboarding is virtualized now, the torture slow. Banks, not tanks, do the dirty work. But any sociologist will tell you economic violence is, in the end, just as real as any other kind; it results in premature death (due to alcoholism, diabetes, suicide, malnutrition, crime, inadequate health care, etc.; the life expectancy of the poor is foreshortened in a thousand ways). It constitutes its own special, pseudo-sanitized form of eugenics.

This is why Herr Doktor Schäuble's shortsighted, not-at-all-helpful non-solution of 5-year Grexit must be defeated; so we can end World War IIa before it goes to revision IIb. We must somehow break into the twenty-first century. And forge a new path forward—one that includes, and does not shove aside or exteriminate or subjugate, the less fortunate. Because at the end of the day, we are all now Greeks.

To my Jewish friends who will object (strongly, perhaps) that there is no comparison between the gas chambers of Dachau and "mere" economic privation, let me say how strongly I agree with you, and yet let me also say this: As one who has thought deeply about the subject of suicide over the years, it is (still) not intuitively obvious to me that a sudden knife in the gut is fundamentally worse than years of slow death accompanied by degradation. The non-sociologically-trained layman can be forgiven for thinking there's a difference between the two, and there is, physically and temporally, a difference, of course, but the question is: At what point is loss of dignity, combined with slow death, actually worse than quick murder?

The current program of "austerity" advocated by neoliberal/ruling-elite one-percenters is an ersatz program of genocide, eugenics, and death. It is the modern gas chamber. On this, let future history be my judge.