To Vape, or not to Vape?

Six months ago, I stopped smoking. It was the tenth or twelfth attempt. But it finally worked.

My partner (my wife) stopped too. Which is utterly remarkable, since she's schizophrenic, and most people with schizophrenia smoke, and never stop.

Did you see what I did there, by the way? A few seconds ago? I just gave you the best tip anyone can give you about quitting, when I said "tenth or twelfth attempt": Just keep trying, because odds are, you won't succeed on your first try. But odds are, you will succeed eventually. 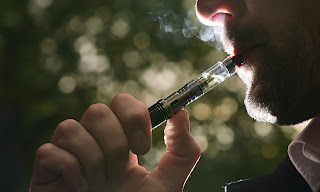 That's how most things are, right? Persistence is usually the difference between success or failure. At anything worthwhile.

I had tried e-cigs before, along with gum, the patch, Wellbutrin, willpower, witchcraft, and lots of other "smoking cessation" "aids," to no avail, or even to horrible travail in the case of Chantix, a drug that made me psychotic, which is another story (told in my book Of Two Minds).

The thing is, if you approach e-cigs or vaping with the idea that it's a direct replacement for a cigarette, you're bound to be disappointed. The two experiences are so far apart—well, let's just say your body is not fooled. Not at all.

But what happened with me is, when the time came to try quitting again, I invested in one of those fancy little quasi-high-tech vaping rigs that cost about $60. You know the kind I'm talking about.


Planted a vape pen in my back yard a few weeks ago and a small fedora is growing out of it
— cool as h*ck turtle (@dubstep4dads) August 28, 2015


What it did for me is this: First of all, note well (confession warning), it seems I have a strong need to have something in my mouth at all times. Call it oral fixation. Whatever. I like to bring something up to my mouth, repeatedly, and suck on it. Don't judge me.

Secondly: I have a strong need, as a writer/technodweeb, to sit at my laptop for extended periods, which is to say until blood appears on my forehead. I don't like to get up from the computer. Ever. For any reason.

Smoking was interfering with my relationship with the computer. That sounds silly, but it's true. If you're a smoker, you're accustomed to stopping what you're doing once or twice an hour to go outside to smoke. That's a given. Right? You have to get up, go outside, puff puff puff, get your fix, then go back inside and try to pick up where you left off.

Horribly disruptive, if you're a writer. Or a programmer. Or chained to the keyboard (a real keyboard, not a phone) for whatever reason(s).

The vape pen let me break that cycle. Twice an hour, I'd ask myself: "Okay, now, do you want to stop what you're doing and go outside? Or do you want to puff on the goddam stupid vape-thing and keep working? Stop? Or puff? Stop? Puff."

The world divides people into "smokers" and "non-smokers," so it seems natural to think in binary terms about smoking; hence you'll tend to view quitting as an all-or-nothing thing, which means no small victories are allowed, only unconditional surrender. Which is nonsense. Success is (nearly always, in this life) incremental. The building blocks are called progress. You make progress in stages. Don't deny yourself some kind of progression to the goal.

Your first "win" will be small. It might be quitting for 24 hours before relapsing. It might be going two hours without thinking about cigarettes. It might be trying the patch for three days. Whatever. If it kept you from smoking for a while, it was a win. Take it! Celebrate it. Move on to the next win.

In my case, I had the considerable advantage of having a partner who was willing to try quitting in parallel with me. This, too, is a good piece of advice: Use the buddy system. Have someone to comiserate with. Quit alongside a fellow pathetic burned-out former human addict who's quitting.

I'd planned to say so much more in this post, but it's getting long. So maybe I can ask you to come back again tomorrow? I have lots more to say about vaping, mourning, clearing the bar, moving on; choosing vape hardware (saving money on replacement components); and much more. I also need to do a post, or series of posts, on why nicotine is not the enemy (smoke is). There's so much to say.

I'll return to this subject. Please meet me here again tomorrow. It's important.

Now . . . where the heck did I put that little vial of glazed-donuts-run-over-by-a-RAV4 vape juice?