Why It Was Easier to be Skinny in the 1980s (theatlantic.com). Study finds that people today who eat and exercise the same amount as people 20+ years ago are nevertheless fatter.

Wal-Mart's Core Business Is Getting Crushed (businessinsider.com). "The retailer is plagued by negative customer feedback 'due to lack of convenience in shopping Supercenter formats, below-average customer service, and below-average quality, freshness, and breadth of produce,' Wayne Hood, an analyst at BMO Capital Markets, wrote in a recent research note." No mention of employee churn or low pay. The story does mention Wal-Mart losing share to Publix, but fails to note that Publix is consistently rated a good place to work by employees. 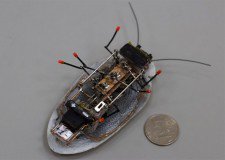 Russian Scientists Create Cockroach Spy Robot (thestack.com). "Berkeley has been working on their cockroach for the past four years, but they didn’t have to make it look like an insect, so it’s faster than ours."

The Mystery of the Clintons' Missing Millions (forbes.com). "Since Bill and Hillary Clinton left the White House in 2001, they have earned more than $230 million. But in federal filings, the Clintons claim they are worth somewhere between $11 million and $53 million." Where did all the money go? (My guess: Fancy haircuts.)

Zero UI: The Future of UI Design (fastcodesign.com). Any sufficiently advanced UI is indistinguishable from no UI.

Surprising Data on Who Owns U.S. Firms and How Much They Pay in Taxes (blogs.wsj.com). Note: Unlike other WSJ links, the blogs.wsj.com stories are not paywalled. This one is worth taking a look at, because it sheds light on our failed corporate tax policy, which enriches the 1% while impoverishing the rest of us.

There Is No County in the U.S. Where a Minimum Wage Worker Can Support a Family (citylab.com). Not exactly surprising, but: Why do we pretend minimum wage is good for anyone except employers? Either fix the system or call it what it is: government-condoned economic slavery.

The Doublespeak of the Gig Economy (theatlantic.com).

The Thucydides Trap: Are the U.S. and China Headed for War? (theatlantic.com) Based on 16 case studies, the odds of war with China are now 75%.

We Lost Our Daughter to a Mass Shooter and Now Owe $203,000 to His Ammo Dealer (HuffPost). Legal system: broken.

Texas Man Arrested For Vandalizing His Own Truck (crooksandliars.com).

The Life of a Professional Guinea Pig (theatlantic.com). "For professional guinea pigs, Phase 1 trials are almost always where the money is." Get paid to do drugs! What could possibly go wrong?

It's Expensive to Be Poor (economist.com). Amazingly, 8% of American households do not have a bank account (because they don't have enough money to qualify for no-fee banking). It turns out the poor pay up to 10% of their income to get/use what little money they have.

"If you’re making minimum wage, you shouldn’t be having children," Fox guest explains (rawstory.com). Welfare reform has always been aimed at eugenics. It's not usually stated this baldly.

450 people worldwide have died of Alzheimer-like brain disease due to contaminated growth hormone (reuters.com): Read the final sentence of the article. Chilling.

Join us here every Friday for the best in alternative news: stories that went untweeted but that everyone needs to know about.

Thank you to everyone who retweeted me recently: