Once more, it's Saturday morning and I find myself catching up on really important reading, stuff I've been caching all week in hopes of getting back to Real Soon Now. At the top of the list? This excellent post by Ron Patrick describing his jet-powered VW Beetle, which was featured on the David Letterman Show (above) on September 9, 2007. Patrick's web page has lots of photos and goes into detail about the design, motivations, and installation details behind the use of a General Electric T58 turboshaft engine (meant for Navy helicopters) in a street-legal Beetle. The engine in question develops 1350 horsepower in its original helicopter application, but note that that's in a turboshaft configuration. Patrick is using it as a free turbine (jet thrust only, no mechanical drive). If he were to couple it mechanically to the drive train of the Beetle, the torque would probably pretzel the car's chassis faster than you could say Holy Halon, Batman, where's the fire extinguisher?

Is this a great country, or what? 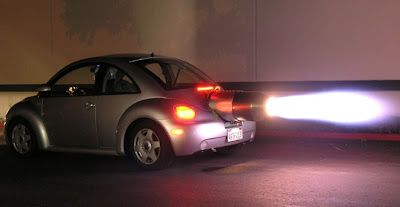