You are not a gadget, progress is not a widget 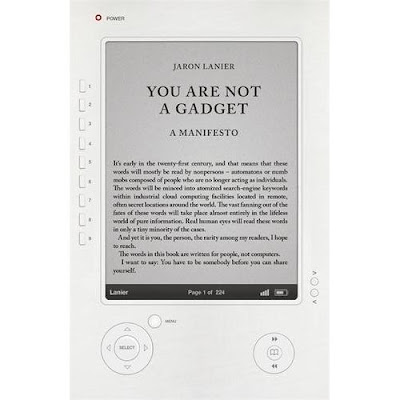 Lately I've been reading Jaron Lanier's brave new manifesto, You Are Not a Gadget. I admire it greatly. It takes courage, after all, to stand up in public and say Web 2.0 is dehumanizing. It's a book that goes against the populist "information wants to be free" grain of the supposedly open world of the Web and asks difficult questions, like where all the great new online music has gone (will there ever be another Beatles?) and what we're all supposed to do for a living after information is free and Google is the only commercially viable aggregator left standing.

You know it's going to be an interesting book when you encounter, on the first page of Chapter One:

Something started to go wrong with the digital revolution around the turn of the twenty-first century. The World Wide Web was flooded by a torrent of petty designs sometimes called Web 2.0. This ideology promotes radical freedom on the surface of the web, but that freedom, ironically, is more for machines than for people. Nevertheless, it is sometimes referred to as "open culture."

Anonymous blog comments, vapid video pranks, and lightweight mashups may seem trivial and harmless, but as a whole, this widespread practice of fragmentary, impersonal communication has demeaned interpersonal interaction.

Lanier's various laments extend to -- among other targets -- popular music culture (a retro wasteland of recycled motifs of the 1980s and 1990s), online advertising (which he says "is elevated by open culture from its previous role as an accelerant and placed at the center of the human universe"), and the lack of originality of the open-source movement. On the latter point, Lanier notes sardonically that the crown jewels of the open-source world, Linux and Wikipedia, are little more than finely honed, handcrafted digital tributes to the utterly creaky museum-pieces known as UNIX and Encyclopedia Britannica.

"Let's suppose that back in the 1980s," Lanier remarks, "I had said, 'In a quarter century, when the digital revolution has made great progress and computer chips are millions of times faster than they are now, humanity will finally win the prize of being able to write a new encyclopedia and a new version of UNIX!' It would have sounded utterly pathetic."

I'm not finished reading You Are Not a Gadget (I still have 50 pages to go), and still not sure what I think of some of the ideas, but on the whole, I'm glad I'm reading it. It's like a blast of fresh air.