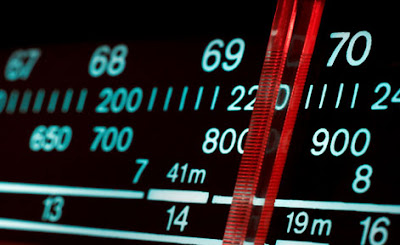 Not content to be the undisputed overdog of Internet advertising, Google appears poised to take on radio advertising (yes, radio) as its next major target of opportunity.

If you go to the US Patent and Trademark Office's site and do a quick search of "AN/Google AND ABST/radio" (meaning, look for patents where the Assignee Name is Google and the Abstract contains the word "radio"), you come back with no less than nine hits (as of today, at least). Five of the nine are actually continuations of a single patent that was filed on March 8, 2005. Two others are likewise extensions of one and the same patent. So in all, there are really just four radio-related patents. But that's surely enough to show the beginnings of a bizarre trend.

The most recent patent (granted March 2, 2010), No. 7,672,337, is called System and method for providing a digital watermark. What's bizarre about this one is that although it purports to be about digital watermarks, the word "watermark" occurs only once in the patent (other than in the title), and nowhere in the abstract. The abstract, in fact, says:

What does this have to do with digital watermarks? Good question.

"The present invention enables the monetizing of unsold inventory," Google's inventors (Chad and Ryan Steelberg) explain, adding that the invention "provides a system and method for accurately and timely identifying where and when a radio advertisement or radio program is broadcast. The present invention may provide a communication environment configured to monitor, track, and report on radio verification of broadcast information related to a specific advertisement or program. This broadcast information may be transmitted via a network-accessible server and formatted for retrieval over a network. The present invention may be designed to permit a reporting-service subscriber to connect, such as via a network, to a server and request a report, which may be based on the verification of broadcast information, for a selected advertising campaign or radio program."

If that's clear as mud, you may want to try grokking U.S. Patent No. 7,660,557, Dynamic selection and scheduling of radio frequency communications, granted February 9, 2010. The abstract says:

And then there's U.S. Patent No. 7,460,863, Method and apparatus using geographical position to provide authenticated, secure, radio frequency communication between a gaming host and a remote gaming device, which is concerned with "the field of radio frequency communications in, more particularly, to a management and distribution network connecting radio frequency broadcast centers for the purpose of delivering data to RF enabled remote devices and an RF enabled remote device with GPS capability for secure off-site gaming applications."

Finally, there's U.S. Patent No. 7,363,001, Dynamic data delivery apparatus and method for same, which describes "a system for providing enhanced radio content to a remote user." According to the abstract:

The patent goes on to explain:

The present invention may enable small and mid-sized radio groups to aggregate advertising inventory with other stations to create a national advertising network. This technology may enable an intelligent cost effective national ad network. Entities who join a network may be able to capture a greater portion of the national radio advertising market that currently is not captured at all or by the entity. Incremental revenue gain, by capturing national ad buys more efficiently, may permit radio stations to offer additional barter inventory to a company. According to an aspect of the present invention, and based on the installed base, the option may exist to provide national advertisers with access to 3,500 stations to run national radio advertising campaigns.

So there you have it. In case you're not getting enough Google-tailored ad content in the margins of your Gmail, start expecting it in the remnant slots of your AM and FM radio stations -- and maybe your favorite cable channels as well.