Searching for Aliens in our Genes

I spent a lot of time thinking about whether it would be a good idea to write an April Fool's Day spoof blog for today, then this 100% legitimate scientific paper about evidence of alien intelligence in terrestrial DNA fell into my lap and I said to myself: Who the heck needs an April Fool's day joke-blog when you can just cite the amazing new scientific paper out of Kazakhstan called The "Wow! signal" of the terrestrial genetic code" by Vladimir I. shCherbak and Maxim A. Makukov? 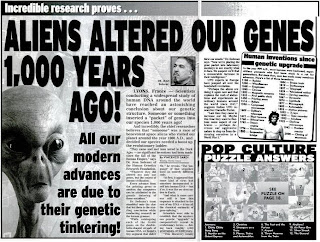 But wait! Don't be too quick to dismiss it. The paper in question was accepted for publication by none other than the prestigious journal Icarus.


It has been repeatedly proposed to expand the scope for SETI, and one of the suggested alternatives to radio is the biological media. Genomic DNA is already used on Earth to store non-biological information. Though smaller in capacity, but stronger in noise immunity is the genetic code. The code is a flexible mapping between codons and amino acids, and this flexibility allows modifying the code artificially. But once fixed, the code might stay unchanged over cosmological timescales; in fact, it is the most durable construct known. Therefore it represents an exceptionally reliable storage for an intelligent signature, if that conforms to biological and thermodynamic requirements. As the actual scenario for the origin of terrestrial life is far from being settled, the proposal that it might have been seeded intentionally cannot be ruled out. A statistically strong intelligent-like “signal” in the genetic code is then a testable consequence of such scenario. Here we show that the terrestrial code displays a thorough precision-type orderliness matching the criteria to be considered an informational signal. Simple arrangements of the code reveal an ensemble of arithmetical and ideographical patterns of the same symbolic language. Accurate and systematic, these underlying patterns appear as a product of precision logic and nontrivial computing rather than of stochastic processes (the null hypothesis that they are due to chance coupled with presumable evolutionary pathways is rejected with P-value < 10^–13). The patterns are profound to the extent that the code mapping itself is uniquely deduced from their algebraic representation. The signal displays readily recognizable hallmarks of artificiality, among which are the symbol of zero, the privileged decimal syntax and semantical symmetries. Besides, extraction of the signal involves logically straightforward but abstract operations, making the patterns essentially irreducible to any natural origin. Plausible way of embedding the signal into the code and possible interpretation of its content are discussed. Overall, while the code is nearly optimized biologically, its limited capacity is used extremely efficiently to store non-biological information.

The authors -- Dr. Vladimir I. shCherbak, a mathematician at the al-Farabi Kazakh National University of Kazakhstan, and Maxim A. Makukov, an astrobiologist at Kazakhstan's's Fesenkov Astrophysical Institute -- list certain criteria they feel would have to be met by any "signal" placed in our DNA by aliens. For example, the signal should be in the form of a pattern (not randomness) and should be unlikely to exist by chance. Then they make the claim:


We show that the terrestrial code harbors an ensemble of precision-type patterns matching the requirements mentioned above. Simple systematization of the code reveals a strong informational signal comprising arithmetical and ideographical components. Remarkably, independent patterns of the signal are all expressed in a common symbolic language. We show that the signal is statistically significant, employs informational capacity of the code entirely, and is untraceable to natural origin.

Predictably, the intelligent-design crowd (always eagerly scouring latest Kazakhstani findings for evidence of intelligent design artifacts that can't be explained by natural phenomena) latched onto the paper and began touting it as evidence of God's hand at work.

But what have the Kazakhstani scholars really found? It seems they've discovered numerology. They fiddle with the atomic masses of amino acids, start partitioning codons in weird ways, then suddenly strange numbers like '111' and '333' and '666' start to appear and we begin seeing the (prime) number 37 crop up just a little too frequently to be explained by anything other than aliens (but always written as 037 for some reason), and before you know it, we're reading things like:


Meanwhile, there are 333 chain and 592 block nucleons and 333 + 592 = 925 nucleons of whole molecules in the IV-set. With 037 cancelled out, this leads to 3^2 + 4^2 = 5^2 – numerical representation of the Egyptian triangle, possibly as a symbol of two-dimensional space. Incidentally, codon series in the ideogram (Fig. 7a) are arranged in the plane rather than linearly in a genomic fashion.


It is often said that genomes store hereditary information in quaternary digital format. There are 24 possible numberings of DNA nucleotides with digits 0, 1, 2, 3. The ideogram seems to suggest the proper one: T ≡ 0, C ≡ 1, G ≡ 2, A ≡ 3. In this case the TCGA quadruplet (Fig. 9a), read in the distinguished direction, represents the natural sequence preceded by zero. Palindromic codons CCC and TCT (Fig. 10b) become a symbol of the quaternary digital symmetry 1114 and the radix of the corresponding system 0104 = 4, respectively. Translationally related AGC, or 3214, codons (Fig. 9b) possibly indicate positions in quaternary place-value notation, with higher orders coming first. The sum of digital triplets in the string TAG + TAA + AAA + ATG + ATG (Fig. 10c) equals to the number of nucleotides in the code 30004 = 192. Besides, T as zero is opposed to the other three “digits” in the decomposed code (Fig. 6). Finally, each complementary base pair in DNA sums to 3, so the double helix looks numerically as 333…4, and the central AAA codon in Fig. 10c becomes the symbol of duplex DNA located between genes. Should this particular numbering have relation to the genomic message, if any, is a matter of further research.

So let's recap. First, posit the existence of numerical patterns in the genetic code as evidence of non-earthly intelligence. Next, find said patterns, no matter how screwball they are. Then calculate the implausibility of said patterns occurring by chance. Voila! Intelligent design. (But is it by aliens, or by God? Further research may be necessary.)

I congratulate the authors, and the journal Icarus, for one of the most peculiar "scientific papers" seen this side of -- Kazakhstan.

For more, be sure to visit the authors' page at http://gencodesignal.org/.