Antidepressants, particularly those that affect serotonin metabolism, are famous for causing "sexual side effects." According to package inserts for the drugs, such side effects are relatively uncommon, but that's because patients in clinical trials don't readily volunteer information on sexual problems on their own; you have to ask them about it. When researchers have specifically asked patients about sexual side effects, the topic comes up 58% to 73% of the time, depending on the drug. 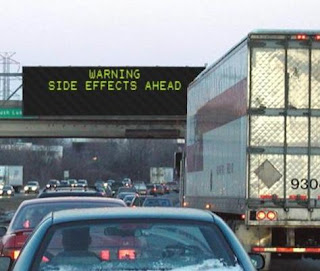 If you go looking in the scientific literature for an explanation of why "sexual side effects" happen at all, you'll mostly encounter rather vague, unsatisfying explanations. I did a little digging on my own and came up with what I think is a fairly edifying scientific explanation of what's going on. (From here, it gets a little technical. Bear with me if you can.)

"Sexual dysfunction" covers a lot of ground, and the gaps in our knowledge of the biochemistry underlying things like arousal and orgasm could better be called knowledge in our gaps. However, we do know that nitric oxide (NO) metabolism plays a huge role in stimulatory response. Clitoral erection as well as penile erection depend on production of NO and subsequent NO-induced accumulation of cyclic guanosine monophosphate, or cGMP (see this paper).

Nitric oxide is an interesting molecule. It's a gas at room temperature; soluble in oil as well as water; extremely corrosive; penetrates cell membranes with ease; and is probably the most widely distributed free radical in the human body. For many years, researchers knew of something called the endothelium-derived relaxing factor (EDRF), a substance produced by the inner cell lining of blood vessels, capable of signalling the surrounding smooth muscle to relax (resulting in vasodilation and increasing blood flow). It turns out EDRF and nitric oxide are one and the same. When NO is produced (from arginine and a bunch of cofactors, by the action of an enzyme called, shockingly enough, NO synthase), it triggers massive production of cGMP, which in turn activates protein kinases that (in turn) cause reuptake of calcium ion, which (through a bunch more steps) results in relaxation of smooth muscle.

You wouldn't think relaxation of muscle would be the key to getting an erection going, but that's because you're thinking of the wrong "muscle." Here, we're concerned with blood-vessel smooth muscle. Relaxation of that kind of smooth muscle is crucial to allowing blood to find its way into the structures that ultimately cause a clitoris or penis to become engorged. Without an increase in NO production and all the downstream effects that lead to vasodilation, there's no arousal.

Nitric oxide is not just a vasodilator, though. It's also a gasotransmitter, which is to say a gas that has neurotransmitter properties.

The primary target of SSRIs in the body is the SERT (serotonin transporter) protein, which is the agent responsible for "reuptake" of serotonin. At first glance, it's not at all obvious how serotonin reuptake plays a role in nitric oxide formation. However, an extremely alert group of researchers at the Centre National de la Recherche Scientifique in Montpellier, France, realizing that SERT is known to associate with various proteins having a so-called PDZ domain, and also realizing that neuronal nitric oxide synthase (nNOS) has such a domain, decided to do an experiment. They fused a carboxyl-terminal SERT peptide to Sepharose beads and poured mouse-brain homogenate over the beads to see what stuck. The most abundant protein to stick? None other than nNOS.

The French team found that when nNOS and SERT were coexpressed in a cell line, they bound to each other in vivo. They also found that exposing serotonin to a cell line expressing SERT and nNOS caused the production of NO. Thus, if you blockade SERT (cutting off serotonin reuptake), you interfere with NO production at the source, because nNOS (the enzyme responsible for producing NO) and SERT (the serotonin transporter) are, in fact, joined together, in vivo. (See this PNAS paper for an overview.) Interfering with NO production is bad, of course. No nitric oxide, no erection.

To me, this provides a pretty believable model of how SSRIs interfere with erectile function.

Before leaving the subject of nitric oxide production, I should mention that a huge amount of work has shown that NO metabolism is profoundly impaired in patients with diabetes. The work of the Centre National de la Recherche Scientifique team (outlined above) suggests a mechanism by which SSRIs interfere with NO metabolism. Another connection between SSRIs and diabetes?

And finally: It's thought by some that Minoxidil owes its hair-regrowing effects to the fact that it's a nitric-oxide agonist (Mi-NO-xidil). This suggests that hair loss would be an expected "side effect" of SSRIs. And indeed there are scattered reports of such in the literature.