The Geography of Cancer, by Gender

It's a mystery. Why should the geography of cancer be different for men than for women? Maybe you can think of an answer. If so, be sure to leave a comment.

Here's the graph for cancer mortality rates among all U.S. women (1985-2004), by county, courtesy of http://ratecalc.cancer.gov/ratecalc/: 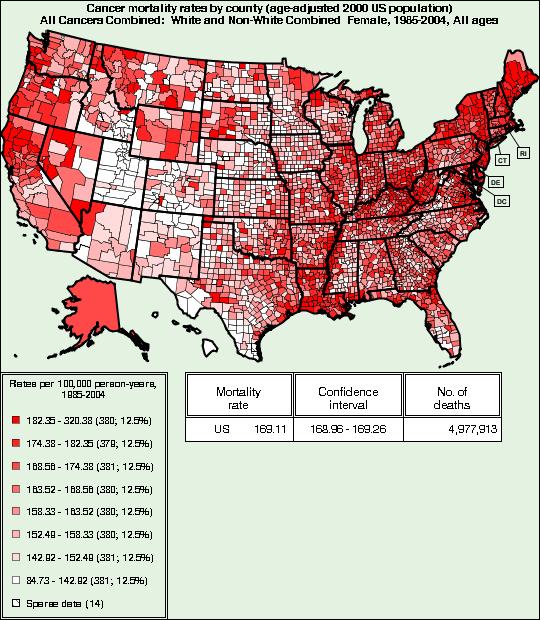 Notably, cancer in women seems to be higher along the Mississippi and Ohio Rivers as well as the Hudson River. There is also a lot of red in coastal New England, the Gulf states (except southern Texas and southern Florida), and northern California.

Compare the above graph to the graph for U.S. men: 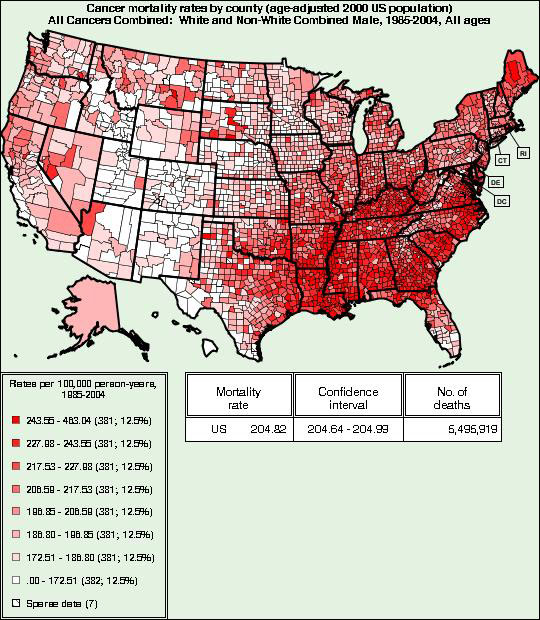 The map for men shows an extraordinary concentration of cancer mortality in the South. Note the huge difference between southern Florida and northern Florida, and also between west Texas and east Texas. A thin strip of reduced-cancer geography follows the Appalachian Trail.

It should be noted that the numbers for men are much higher than for women. In the graph for women, the darkest reds start at 182.35, which is only light pink on the men's graph. Nevertheless, the key point is that the geographical distribution of mortality is qualitatively much different for men. The highest death rates for men are clearly in the southern states.

It wasn't always this way. The two graphs above are for the years 1985 to 2004. The graph below shows what cancer mortality for U.S. men looked like using statistics from 1950 to 1984: 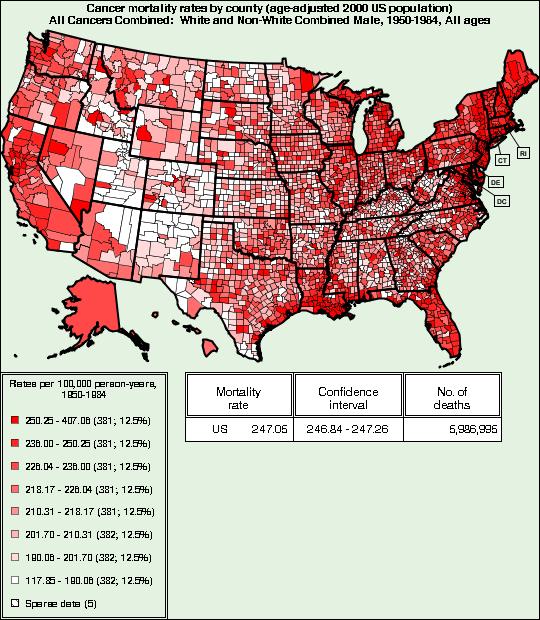 This graph shows a pattern much more similar to the women's graph. Somehow, between the 1960s and the 1990s, cancer in men migrated to the southern states. But why?

One clue might be found in the country's changing demographics: The U.S. had a much younger population in 1950 than in 2004. In 1950, barely 8% of the country was age 65 or over. Today about 20% of U.S. citizens are 65 or over. The cancers of old age, in men, are lung (No. 1) and prostate (No. 2). And it does appear that cancer mortalities from those two categories map disproportionately to the southern states. (I'll show the prostate map in my next post.) But still, cancer knows nothing about geography. Why should it be more pronounced in the South? Especially since a map of U.S. population by age shows no accumulation of older Americans in the South?

This is, in my opinion, a rather large open question in epidemiology. It would be nice if someone could provide an answer.