What I Do When I'm Blocked

My good friend Jeff e-mailed me the other day to ask how the book is coming. (I'm 25,000 words into a comedic novella.) He knows I've run into problems with it here and there (I won't call it writer's block) as I try to work out the story line and keep numerous balls in the air at the same time. He asked what I do when I get bogged down. Watch a movie, perhaps? 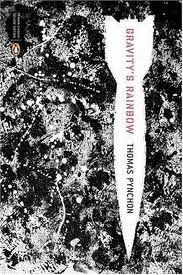 This is what I wrote back to him (in stalled-writer mode):

Correct, sir. To combat blockage, I do resort to movies, books, diversions (Twitter, LinkedIn, long e-mails to friends), more coffee, a few minutes on the porch while the dogs take their potty break, basically anything but exercise (not counting sex as exercise, in this case). Last night I watched half a movie. May or may not watch the rest.  A story about some people who try to befriend an antisocial dwarf who has inherited a broken-down train depot. I am not kidding. That's the premise. I thought I might get some ideas while watching it. But it's kinda slow. Yet it got great reviews. It's called "The Station Agent."

I also continue to read Gravity's Rainbow. The story is starting to pick up a little (p. 270 now, near the end of Part 2 out of 4) although the book can't, in all seriousness, be said to have a plot. I do admit to being fascinated by Pynchon's writing style. Mystified and fascinated. How did he get this thing published? First of all, what English-speaking reader is going to know all the French and Latin and German terms? What kind of audience knows even the English words he uses? words like palimpsest, scombroid, nacreous, velleity. Who said it's okay to have a 700-page novel without a plot? etc. etc.

The reason I read it is that the command of language is unbelievable. And the damn fool knows his writing is ace, because he delights in throwing in the occasional "sez" (for "says") and other irritations just for fun! Reading it is a kind of Zen challenge. I deconstruct as I go; I look at what he's describing, and compare it with HOW he's describing it, and it's quite educational. The dialog is just as infuriating as the narrative: characters speaking in half-sentences, two chars engaging in parallel soliloquys rather than replying to each other, punctuation all over the place. Someone in a forum excerpted a 100-word sentence and called it a "cluster-fuck of words." That's about right.


Still, there's a certain logic behind it (I can see the Boeing tech writer in him), and it's endearing to go from a sadomasochism scene to differential equations in the space of a few pages. He actually cites a few equations here and there (Poisson's formula, plus an equation for yaw stability of a rocket).

The love scenes lack passion -- which I have to conclude must be deliberate on Pynchon's part -- and the story, overall, lacks heart, but I think (not to belabor the obvious) there's a certain attempt here to render the story that way intentionally, yes? because it's a war story, and war (with its debasement of life and monstrous bureaucracy) is a sterile and heartless business by its very nature. So again, Pynchon gets away with things that would not work in other stories; this "story" (if it can be properly so called) works well with the kind of approach he uses, whereas I don't think it would work for a wide range of settings and themes. The meta-theme here is death, war, destruction, paranoia, the culture of war-engineering; the (quick, quick, Mr. Pynchon, what's the German word?) Sinnlosigkeit, the meaninglessness, of all the above. The tale is told in suitably parallel style, aggregating seemingly pointless vignettes into a strenuously lifeless non-story about characters who come, go, eat, fuck, talk, all the while never quite interacting with each other in any kind of meaningful way. A remarkable synthesis, really.

Reading Pynchon, I feel like I'm on a grand journey of some kind, and having been liberated from the tyranny of plot and climax and denouement, I'm at leisure to enjoy the journey for its own sake with no obligation to care about the destination or route. If the journey should end with disorienting, unfulfilling suddenness (as the war in Europe did, Hitler vanishing into the aether...), I'll disembark none the worse for wear.