In an interview at Vox, Robert Lustig makes the case for treating sugar like a controlled substance, similar to alcohol and tobacco. The case is very easy to make, of course. Sugar is, for many people, every bit as addictive as other abused substances; people self-medicate with it for many of the same reasons they use alcohol or tobacco, in fact. For many of us, a nice blast of sugar, in the right form, at the right time (e.g., a piece of chocolate cake after dinner), produces a euphoric high that temporarily tamps down the troubles of the day. The thought of living without that high is a little scary, actually.

You can argue that sugar is not addictive, if you want, but there's no disputing that our use of it is out of control. Americans consume well over 100 pounds of sugar per person per year. 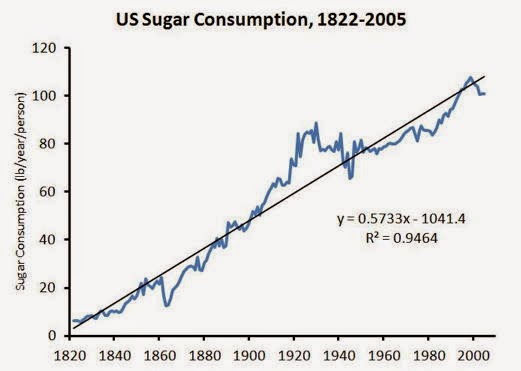 In 1822, we ate the amount of added sugar in one 12-oz. can of soda every five days, while today we consume that much sugar every seven hours. Not surprisingly, obesity and diabetes are now major pubic health problems, but it's worse than that. One group of researchers estimated (based on mortality data for 900,000 people, spanning 16 years) that "current patterns of overweight and obesity in the United States could account for 14 percent of all deaths from cancer in men and 20 percent of those in women." Whether you get fat by eating sugar or by some other means, your cancer risk goes up sharply as you gain weight. (See this paper for details.)

Of course, sugar industry apologists will argue that eating sugar is a choice people make, blah-wah-wah, as if industry has no responsibility whatsoever to the public; and sugar denialists will claim that the correlation between sugar consumption and obesity doesn't prove causation; and other such moronic crap. But the fact is, we have a serious public health crisis on our hands, one that (unlike Ebola) is killing hundreds of thousands of people a year; and we know what the culprit is, yet we're like brain-damaged lemmings when it comes to doing anything about it.

The solution isn't some draconian Volstead Act. We didn't get here overnight, and the fix isn't going to happen overnight. It seems pretty obvious that the place to start is by getting rid of the ridiculous, antiquated, wasteful corn subsidies that the U.S. government pays to farmers (and fuel-ethanol producers) to produce corn (as in syrup) at artificially low, non-free-market prices. Those subsidies made sense in the 1920s, but no longer do. We should begin rolling those subsidies back at the completely sane, non-disruptive, non-controversial rate of two percent per year, so that in half a century our children's children will look back and say "Remember, in grandpa's day, when a third of people got diabetes? Wow, those days must have been horrible!"

We also need to levy just enough of a tax on cane and beet sugar to make zero-calorie tea and cola noticeably more affordable than the ridiculously sugar-fortified tea and cola drinks people are drinking now. That way, the libertarians (and others) who want personal choice can choose to pay 10 or 20 cents extra for "real Coke" if their delicate taste buds can't abide Coke Zero. We need that tax money, now, to pay for the adverse long-term medical consequences of consuming too much sugar, something Medicare is currently saddled with.

In a WSJ/NBC News poll, Americans identified sugar as being more harmful than marijuana (by almost a two-to-one margin). I think the average person is smart enough to understand we need intelligent public policy, right away, around our out-of-control sugar problem. Our failure to act on this most basic public health issue (while we argue about who should pay for health insurance) is costing lives daily.