The New Era of Corporate Gigantism 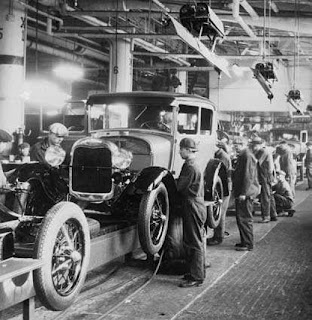 While we're talking economics, we might as well talk about how competition has fared in pre- and post-Internet economies. The pre-Internet part should be broken up, historically, into pre- and post-mass-media eras. Before the advent of mass media, markets were essentially ecosystems, characterized by diversity and competition. Massive scalability was difficult to achieve. Henry Ford achieved massive scalability by deconstructing complex assembly tasks into smaller tasks that could be accomplished on massive scale by secialized workers, whose output could then be coordinated to produce complex machinery on a massive scale. In a sense, he leveraged the well-known (today) principles of modularity and Separation of Concerns. In doing so, he achieved unprecedented economies of scale, which were hitherto not possible.

Vertical integration was another popular technique pioneered by Ford and other industrial giants of his time. Ford's rubber plantation in the Amazon was not a success, but many other of his "verticalization" attempts were.

It should be mentioned in passing that the reason Ford cars could only be obtained with black paint is not because it was the cheapest color, but because black paint dried the fastest and therefore didn't slow down production. Prior to the advent of the assembly line, you could obtain a Ford car in any number of colors.

We often forget that Ford was a champion for fair wages and utterly flabbergasted the world in 1914 by proactively offering $5-per-day wages (more than double the average wage at the time in America) at his factory, which caused skilled workers to flock to the factory and vastly reduced both turnover and training costs. He also advocated the 48-hour work week (a vast improvement for most workers). Later in his life he would adamantly fight labor unions, however.

Scaling a business, prior to the advent of mass media, mostly meant owning more storefronts (or more factories, or more oilfields) than your competitors. This was also something Ford excelled at. He established a franchise system that put dealerships throughout most of North America and in major cities on six continents.

The franchise system pioneered by Ford and others is basically a cartelization mechanism. Instead of having businesses that would normally compete against one another, franchising allowed businesses to carve up territories and have no competition within a given territory.

The years leading up to the appearance of the Internet saw the widespread application of franchising and brand-building as cartelization techniques, to the point where "ma-and-pa" entrants in a given market (whether for fast food, books, clothing, banking, gasoline, hardware, tires, home goods, groceries, or you-name-it) were all but eliminated. By 1980, you could pass down any Main Street in America and see the same names: McDonalds, Burger King, Walmart, Target, Best Buy, etc., with hardly a non-franchised name in sight. The familiar megabrands of today have put literally millions of small business owners out of business for good. 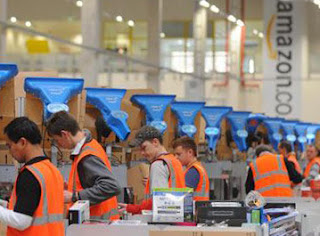 The new sweatshops of today are owned by the likes of Amazon.The Amazons of the world have ushered in a new era of capitalism, in which physical storefronts are made obsolete (and competition along with it). As I noted in yesterday's post, Internet-scale businesses permit one, and only one, major winner per sector. Names like Facebook, Amazon, Google, Groupon, Twitter, Salesforce.com, etc., are the new Ford Motor Companies and Standard Oils―the new trusts, the new monopolies―of today. In Internet markets, there can only ever be one category winner.

President Obama likes to talk about how education will lead the way out of our economic doldrums. If only we had more engineering graduates, more science graduates. But in fact, those are the very jobs that are going overseas in record numbers.

If Obama (or any president) truly wanted to encourage small-business ownership, he would break up the Internet monopolies and do away with franchises (which are simply brand-cartels). Of course, to do so would be seen as un-American (and is politically impossible at this point, in any case). But the alternative is a world of monolithic, anticompetitive corporate gigantism on a scale never imaged. It's a world that's just beginning.