Screenwriter William Goldman (best known for Butch Cassidy & The Sundance Kid) once famously said of Hollywood: "Nobody knows anything."

I'm here to tell you that the same is true, only more so, for Wall Street. Don't be misled.

There are only two people I trust when it comes to investment advice: Jim Cramer, and myself. And there are times when I don't trust either one.

How's that for paranoia?

Here's the truth about investing. No matter what you invest in, knowing what you're doing means understanding markets. And almost nobody understands markets, because to understand markets you have to be able to wrap your head around why people do the weird things they do when they're in the grip of greed, fear, and desperation.

And so, a good "first book" in investing would be Charles Mackay's 1841 classic, Extraordinary Popular Delusions and the Madness of Crowds. (PDF copy available free here.)

The second book you should read (for pure entertainment value, if nothing else) is Jim Cramer's autobiographical Confessions of a Street Addict. If you're a writer or journalism student, be sure to read this book. Cramer started out as a journalist, covering the crime beat for the Tallahassee Democrat, where he covered the Ted Bundy murders. He later worked for the derelict and decrepit Los Angeles Herald-Examiner (before it went under), where he eventually got tired of being poor (he was living out of his car after being robbed twice) and thus applied to (and got into) Harvard Law. The rest of Cramer's incredible story, you'll have to read for yourself. If you read only one of Cramer's books, though, make sure it's this one.

Cramer is far from infallible. But he's the smartest guy on Wall Street, and the one guy I'd seldom want to bet against. I've learned a ton from him. 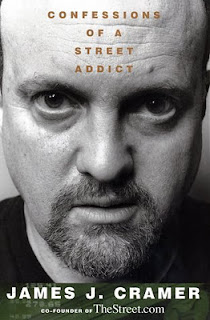 I've also learned a ton from practical experience. Over the years, I've traded gold futures, cotton futures, lumber futures. I've traded stocks and options. I've wandered into markets I had no business being in. In 2007, I did something like $1.3 million in trades on a $60K account (yes, lots and lots of small trades), largely because I was on a continuous dopamine high induced by a Yale-trained quack who had me taking a cocktail of pharmaceuticals that made me as manic as Richard Simmons on crystal meth.

The reason I'm writing this is because I actually think I'm a pretty decent investor at this point, and I think I can make you one, too, in about 15 minutes. Or at the very least, I can keep you from making some very awful mistakes. So listen up.

The first thing you need to do to educate yourself about markets is learn to distrust every market "expert" you come across (myself included) and just spend some time watching markets in action. Turn on CNBC and mute the volume. Watch the ticker for a few days, do a lot of chart-watching on Google Finance, get a feel for what kind of mass hysteria is popular at the moment.

If you have one of those lousy company-sponsored 401K plans that only lets you choose between this or that mutual fund, roll that thing into an IRA and begin to manage it yourself. Do some actual investing. Mutual funds are crap, your 401K plan administrator is making tons of money off them (so is your employer), you need to get out of them. Buy actual stocks yourself.

Let me cut the suspense and get right to my investing strategy, which really comes down to just a few very simple rules.

How to put that into action? Very simple:

Rule No. 2: On market up-days, look for opportunities to sell. On market down-days, look for opportunities to buy. Buy on down days, sell on up days. (How else were you planning to buy low, sell high?) Most people are bad at following this rule. People see stocks going up day after day during a rally, and they figure "Why not jump in for the ride?" Wrong, wrong, wrong. Don't buy when prices are going up. Chances are, you're near a top. When you turn on CNBC in the morning and you see that the markets are going to open to the up-side, you should be thinking: "Hmm, I wonder what I should sell today?" Not: "What should I buy today?"

Rule No. 3: Diversify. Own at least 5 stocks, in 5 entirely different sectors. Don't own more than 10 stocks. If you do, you're just running your own mutual fund. You might as well trade the major-average indexes.

Rule No. 4: Own some gold. Every portfolio, without exception, needs to have some gold in it. Gold is the one thing that will be up when the rest of the market is down (or when war breaks out with Iran, or whatever). Don't buy futures and don't buy mining companies. Buy the actual metal. I recommend you just take a position in GLD. That's the simplest, safest way to get in and out of gold. Buy on down days. Hold forever.

Rule No. 5: Go for quality. Don't go crazy buying crappy speculative bullshit flash-in-the-pan stocks. I agree with Cramer that every investor should probably own at least one speculative stock, at some point. (At the moment, Cramer seems to think highly of HEK. I think he's nuts.) But on the whole, you shouldn't buy stocks that have crazy out-of-whack P/E ratios or that you have faint misgivings about, etc. You want to be able to sleep at night. That means owning rock-solid companies, preferably ones that pay a dividend. GE, IBM, Boeing, McDonalds, whatever. They don't have to be Dow stocks. They just have to be quality stocks, companies with a good longterm story that are profitable, have been around a while, and will be around for a good while longer.

Rule No. 6: Always, always, always buy with conviction. If you can't look at the stock you're about to buy and say to yourself "I have absolute, utter conviction in the quality and longterm outlook for this stock," don't buy it. You should have so much conviction in what you're buying that if it immediately goes down, right after you bought it, you simply buy more (because you're now able to get it at a bargain price). If you felt Boeing was a good buy at $75, consider it an even better buy if it suddenly goes to $70! (And remember, you'll feel much better about that "down stock" if it's paying you a dividend while you wait out the up side.)

Rule No. 7: Don't fight market momentum. There will be days when the entire market seems like it's acting crazy (because it is). Markets are sometimes pathological. Things go up that shouldn't go up. Things go down that shouldn't go down. Be ready for it, and accept it as part of the game. (That's a lot easier to do if you stick to Rule No. 2, above.)

Rule No. 8: Decide in advance how long you're willing to stay with a position (and approximately at what price points you're willing to get out). For example, I happen to believe IBM will go to 200 sometime in the next year. If I buy it, I have to be willing to sit on it for a year to see if I'm right. (I don't currently own any IBM, by the way.)

Rule No. 9: Don't forget the big picture. It's a global market. You have to factor global business conditions (and currency fluctuations) into your strategy. For example, some people think agriculture is a major longterm play (because of all the hungry people in the world) and some people think a tractor company like Deere is a good way to play it. That may well be, but if you believe (as I do) that the dollar will be strong for the first half of this year, you may well want to consider Kubota instead of Deere, since the yen is weak and the world's tractor-buyers may well want to pay for tractors using a comparatively much stronger currency.

Rule No. 10: Do your homework but don't fixate on it. In other words, yes, you should know something about a company before you buy its stock, and the more you know, the better. But don't kid yourself into thinking that markets are all about metrics and stats and knowledge and information. They're largely about fear and greed and stupidity and venality. The best-researched investment will often turn sour for no good reason. If you don't believe it, just look at the performance of professional mutual-fund managers, which tends to suck bigtime.

Would I say that 2012 is going to be a good year for buying stocks? Yes. In general, I think this will be a stellar year for U.S. stocks. But you have to be picky. Some obvious standouts include Boeing (with its huge order backlog) and Apple (which is headed for $500 within the next 12 months). I don't currently own any Boeing or Apple, because they seem a tad overbought right now. I'm waiting for a decent pullback before investing in such "obvious" winners.

Last month, I did well with Oracle (which I bought on December 21 when it took a huge fall based on a disappointing earnings announcement, then sold last week after a 10% runup). I also did well with IBM, which I bought around $181, then again around $179, and sold the minute they released good earnings results and shot up $5 a share. I didn't do so well with WebMD, which I bought the day of its calamitous decline (when the CEO left), thinking it would go up quickly. I got impatient and closed out that position at a $0.75/share loss (a bit prematurely).

If AAPL falls after its Jan. 24 earnings announcement, I'll probably buy some at that point. Right now, $420 still seems a bit pricey. It's probably the best stock there is (or ever was), though. I feel like a damned fool for not owning any.