Some Thoughts on Writer's Block 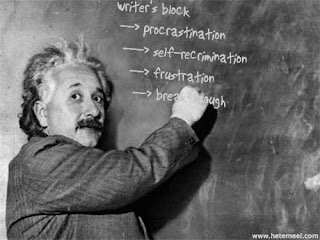 Having made a living as a writer for more years than I'd like to admit, I've devoted quite a bit of time and thought to writer's block over the years, and it strikes me that a quick brain-dump on the subject might help others of my kind out there who occasionally struggle with the process of committing words to paper (or electrons to æther, as the case may be), especially since (as I look at what others have written about writer's block) it seems I come at the question of writer's block from a bit of a different direction than others do. Which may or may not be helpful.

It seems to me there are two broad categories of reasons why anyone runs into "writer's block" (let's not dignify it by capitalizing it). There are external reasons (e.g., I'm worried about XYZ, which is distracting me from writing), and internal reasons (e.g., I can't think of an opening sentence for this section of my paper). In the discussion that follows, I'm not going to deal with external blockers. That's something for you and your psychiatrist. It's the internal blockers that interest me, because those are the hardest, and the most intrinsic to the process.

The vast majority of instances of writer's block can be traced to just two problems. One is the fear of committing verbal crimes against nature (aka perfectionism). The second has to do with the inherent difficulty of the writing process (which is worth elaborating on). Maybe there's a third Main Problem, which is: Your understanding of whatever it is you intend to write about is so fluid, such a moving target, that you just can't see how you can possibly start capturing it in words. In other words, you're still in the process of making sense of whatever it is you're writing about. You feel nowhere near ready to reduce it to (static, frozen, immutable) text. That's a legitimate concern, but it has to do with the second issue, the inherent difficulty of the writing process.

When you begin to realize how difficult the writing process actually is, you will (or should) come to the realization that it's silly to beat yourself up. You absolutely should not beat yourself up when you're blocked. Instead, have great sympathy for yourself. Why? Because what you're attempting to do is, indeed, in a sense, heroic.

Here's the thing you have to realize about writing. The world of thought, of analysis, of understanding, of comprehension, is multidimensional. More than that, it is inherently reentrant, recursive, and iterative, which (therefore) also means it is nonlinear and ultimately chaotic (in the profoundest mathematical sense envisioned by Gleick in his classic book, Chaos). In your procrastination time, I strongly recommend that you read Gleick's Chaos book, because it will give you an unforgettable introduction to the nature of nonlinear systems. That's important, because nothing is more prototypically nonlinear than the thinking process.

When you're trying to understand something, you come at the subject from multiple angles. Invariably, there are many entry points to understanding. As you gain understanding, you add new ideas, then rethink/reprocess everything. The ripple effects are often far-reaching. But the salient point is: Your path to understanding is not a straight line. It's often a random walk in a multidimensional wonderland.

Now consider what the written form is. It's words arranged one after another in a linear chain. You're trying to reduce a multidimensional process to a linear form. This is why writing is difficult (heroic, even). It's a Quixotic quest to reduce the multidimensional to the unidimensional. Really, what could be more absurd?

Unlike the thinking process, a piece of writing has a definite starting point and a definite endpoint. Which is completely unreasonable. It is a sublimely unreasonable demand to say: "Take this complex multidimensional subject and reduce it to a string of words arranged linearly, one after the other." It's unlikely that whatever it is you're writing about has a definite beginning, middle, or end, or a naturally hierarchical top-down structure. Most things worth writing about are not neatly structured.

This, then, is the paradox of writing. The process of writing is a process of projecting multidimensional phenomena (concepts, thoughts, lines of reasoning) onto a one-dimensional wordspace, where words follow one upon the other in a linear string.

But there is hope, because once you understand the built-in disjunction between wordspace and thoughtspace, you can approach the writing process differently than you might otherwise have.

First of all, you can give yourself permission to enter the verbal space from any of a multitude of different directions. Your journalism teacher (or your seventh-grade writing teacher) may have told you that you have to begin at the beginning, and structure a discussion hierarchically, from the top down. But really, that's not true at all. That's not the way thinking works. Why should it be the way writing works?

Give yourself permission to enter a subject sideways, with an anecdote or a seemingly incidental aside. Don't think of your subject area (whatever it is) as a linear body of knowledge, because it isn't. Think of it as a giant collage. Your understanding of it is collage-like. Your job, as a writer, is to render the collage on paper (in wordspace), in a way that will ultimately be comprehensible to the reader. Chances are, the reader will not assail you for not taking a linear approach. Quite the contrary. He or she will thank you, most likely, for rendering a complex subject as a pastiche of digestible pieces: pieces of knowledge that, in the aggregate, make sense (because you have drawn the appropriate connections between the pieces). It's not important that you put "first things first" unless the subject demands it (in which case your job is easy, actually). It's more important that you lay down the major pieces of the collage intact, in a way that will make sense once the overall job is done.

Another good heuristic is: Find the parts of your discussion that mean the most to you emotionally. Begin working on those first, if need be. That will give you good momentum. If you can write with conviction, if you can find aspects of the subject that resonate with you on an emotional level, by all means harness that.

The most important advice of all when you're blocked? Always, always, give yourself permission to write crap. You always need to give yourself license to write pure shit. When you're blocked, writing utter crap is better than sitting there staring at the blank page. So write some junk. You can come back to it later (or not) and pretty it up, make it acceptable. Right now, you just need to get moving.

From time to time, you may hear inner voices saying cruel things. "You're useless." "What you're writing is hopelessly bad." "You'll never make a dent in this, it's futile." What you should do is ask yourself: Is this your authentic adult self talking, or is it your child-self? If it's your inner child (which it almost always is), deal with it as you would deal with a petulent child. Firmly and politely say "That's enough now. I heard you. That's enough." If need be, give the child a time-out. ("Go sit in the corner for five minutes.") Don't let your inner child boss you around. It's not right.

And when you do start to make progress (as you inevitably will), take frequent opportunities to congratulate yourself. You're doing the impossible, after all, the heroic: You're committing thoughts to paper (or words to wordspace). You're reducing the multidimensional to the linear. That's something to celebrate. So celebrate it. And keep moving toward the shitstorm.