Picking Up the Starfish

I keep a five-dollar bill on me at all times.

Compassion comes in smaller denominations (and larger ones, to be sure). But I can't, in good conscience, carry less "spare change" on me than $5.00.

Let me tell you what typically happens to the five dollars.

I was walking down the street not long ago in a small shopping district two miles from my house, on the way from the health food store to Starbucks, when I passed a young black woman sitting on the sidewalk. The woman was wearing tattered jeans and grey tennis shoes without laces, and a hooded sweatshirt that only accentuated her gauntness. Her face was thin, cheeks slightly sunken; it was the face of an old woman and a child at the same time.

While rocking, the young woman looked up at me and muttered something in a voice so soft and frail that I couldn't be sure what she was saying. As I leaned closer to hear her, she said: "Can you spare some change?"

In America, it's customary for passersby treat such people as invisible. They are the "untouchables" of American culture. Americans think of the old (now largely defunct) Indian caste system as embarrassingly barbaric and foreign, but the truth is, in the United States we have a caste system of our own, with untouchables at the bottom, just like in the British-ruled India of old, except that our Dalits, our Panchamas, our Asprushya, go by names of "homeless" and "street people."

Americans don't like to see the stark, inescapable, physical evidence of capitalism's failure, as represented by "street people," because it calls into question our most fundamental beliefs about America being a land of plenty, a land of unequaled opportunity, where hard work is always rewarded, and where (by a curious kind of inverse logic) people who sit on street corners asking for money must, by that very fact, be guilty of not working hard enough. The American Dream dictates that you are the agent of your own destiny. If you end up on the street, it is your fault.

It is considered inappropriate, in America, for ordinary people to give money to the "undeserving." The comic Louis C.K. has a comedy routine built around the inappropriateness of giving money to "street people." Louis describes the alarm that a cousin of his, who had never been to New York City, showed upon finding a disheveled homeless person sitting on the ground outside the Port Authority Bus Station. At one point, the horrified cousin leans down to say to the homeless person: "Oh my God, sir, are you okay? What happens? What happens?" Louis C.K. mockingly says: "What happens? America happens. What do you mean what happens?"

When "America happens," sometimes it's not pretty. Americans, as a rule, staunchly deny the ugly side of American life, the fact that the "American Dream" is actually an American nightmare for large numbers of people. They would prefer to wish away the existence of the 600,000 or so people who are homeless on any given day in the United States.

Americans have all kinds of lame, self-righteous excuses for not giving money to someone in obvious need of help. "He'll only use the money for drugs [or alcohol]" is one such excuse. Another popular sentiment is "That person needs to get a job," or "That person simply doesn't want to help himself." As if the disadvantaged choose their lot out of laziness. As if anyone chooses to starve to death or freeze to death on the streets of the richest country on earth. 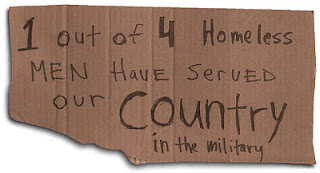 Yet another popular excuse is: "If I give money to everybody who asks for it, I'll go broke."

That one really gets me.

There's an old story (you've probably heard it many times) about a young boy who, after a storm, finds thousands of still-alilve (but soon to be dead) starfish washed up on a beach. The boy starts throwing starfish into the water one by one. An old man happens by. Witnessing the boy's futile effort to save all the starfish, he says: "Why are you doing that?" The boy answers: "Because if I don't, these starfish will die." The old man laughs and says: "But there are thousands and thousands of starfish here. Don't you understand that what you're doing can't possibly make a difference?" Upon hearing this, the boy bends down, picks up a starfish, and hurls it into the sea. He looks at the old man and says: "I made a huge difference to that one."

Many studies have been done, not only in the U.S. but in other countries, of the rate of serious mental illness among the homeless. According to Stony Brook Medicine, 33% to 50% of homeless Americans have schizophrenia. The National Coalition for the Homeless puts that figure at 20% to 25% (and lumps schizophrenia together with other "severe mental illness"). But does the actual figure really matter? It's clear, even to an untrained observer, that a sizable percentage of "street people" are mentally ill.

The young woman I saw on the street that day didn't smell of alcohol. She wasn't exactly a raving lunatic, either, although I do wonder why she was rocking back and forth constantly. (It wasn't cold out. She clearly wasn't doing it to keep warm.)

Here's the bottom line. The criterion I go by when someone asks me for money is very simple. I ask myself: "Does this person look like he or she needs the five dollars more than I do?" If the answer is yes, as it invariably is, I don't lie and say "I haven't got any spare change." I don't avert my eyes like a coward. I don't ask the person how he or she will spend the money. I just give the person five dollars.

Do I feel good about doing that? Yes and no. I feel good knowing that I may have helped someone obtain a meal (or whatever it is they might have needed to get through another day). I feel bad knowing that what I just gave the person in no way "cured" his or her situation.

I only know one thing for sure. If I don't give the person the five dollars? I feel like the old man in the starfish story. I'd much rather feel like the boy.