Can Antidepressants Make You More Depressed?

Antidepressants of the SSRI and SNRI types are very widely prescribed now, sometimes off-label, sometimes for milder depression symptoms, often by family doctors rather than psychiatrists. Anyone who tries one of these drugs should be alert to possible adverse effects, one of which is that they can make you feel worse rather than better, at least initially, if not longer term.

All of these drugs now come with a black box warning (so-called because there's generally a black outline around the warning, in the printed instructions that come with the medication). The one for Effexor says:


Antidepressants increased the risk compared to placebo of suicidal thinking and behavior (suicidality) in children, teens, and young adults. Depression and certain other psychiatric disorders are themselves associated with increases in the risk of suicide. Patients of all ages who are started on antidepressant therapy should be monitored appropriately and observed closely for clinical worsening, suicidality, or unusual changes in behavior. EFFEXOR XR® (venlafaxine HCI) is not approved for use in children and teens.

Some mention age 24 as the upper cutoff for the warning. Don't be misled into thinking there's something magical about a particular age limit. The 23-year-old brain is not that different from the 33-year-old brain. It's important to understand that younger people, because they have less life experience, tend also to have less practice dealing with adversity, and thus have a smaller repertoire of coping skills; plus they tend to maximize ("catastrophize") adversity, or at least teens do. Therefore it's not surprising that people in younger age groups tend to reach for the "suicide" button a little quicker than the rest of us.

In the book I'm writing on mental illness, I devote a chapter to suicide. It's a complicated subject, but one of the main things to understand about it is that, across most cultures, suicide risk increases with age. The following graph applies to the U.S., but many other countries follow this pattern. 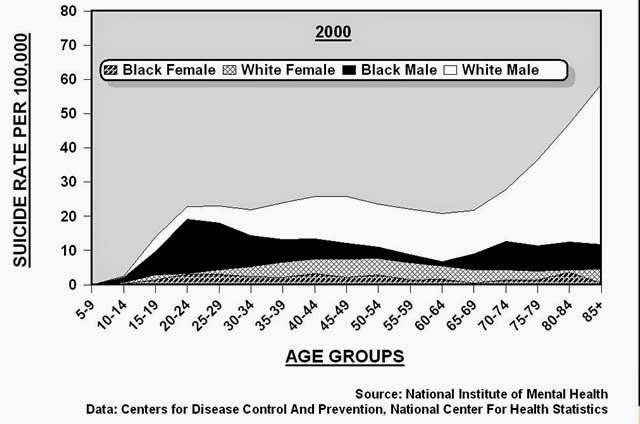 Suicide is also much more of a problem in men than in women. (China is the only country is which women outperform men here.) In the U.S., men complete three times more suicides than women (on a rate-per-100,000-people basis), with elderly white men particularly at risk.

But back to the black box warnings: It's not that the young-adult brain responds to these drugs (SSRIs, SNRIs) in some physiologically unique way. Rather, it's that a younger person is more prone to play the suicide card to begin with; young people make more suicide attempts than older people (but not more completed attempts). It's much more their style of coping, than for older adults. A mature adult is likely to consider a range of other options first, before reaching for the suicide button.

Many people in the medical community have argued against the black box warnings, basically alleging that untreated depression is more likely to kill you than taking the meds. (For more on the controversy, see this psychiatrist's blog. Also see this article in the New England Journal of Medicine.) The black box warnings are there for a reason, though. These drugs can make you feel worse. The Cochrane Collaboration (a respected group that specializes in meta-analyses) did its own review of the literature surrounding the use of antidepressants in young people. This is what they found:


We judged none of these trials to be at low risk of bias, with limited information about many aspects of risk of bias, high drop out rates and issues regarding measurement instruments and the clinical usefulness of outcomes, which were often variously defined across trials. Overall, there was evidence that those treated with an antidepressant had lower depression severity scores and higher rates of response/remission than those on placebo. However, the size of these effects was small with a reduction in depression symptoms of 3.51 on a scale from 17 to 113 (14 trials; N = 2490; MD -3.51; 95% confidence interval (CI) -4.55 to -2.47). Remission rates increased from 380 per 1000 to 448 per 1000 for those treated with an antidepressant. There was evidence of an increased risk (58%) of suicide-related outcome for those on antidepressants compared with a placebo (17 trials; N = 3229; RR 1.58; 95% CI 1.02 to 2.45). This equates to an increased risk in a group with a median baseline risk from 25 in 1000 to 40 in 1000. Where rates of adverse events were reported, this was higher for those prescribed an antidepressant.

(Emphasis added.) The risk of a reported suicide-related outcome increased 58%; of course, we can't know how many people simply felt worse and didn't report it. It's worth bearing in mind that Adverse Drug Events (ADEs) involving psychotropic medications send 90,000 people a year to the emergency room, in the U.S. Of that number, 25,000+ ADEs involve antidepressants.

A relatively large (N=15390) study of antidepressant use in patients aged 10 to 19 in Finland found, interestingly, that among antidepressant users (relative to non-users), suicide attempts went up 39%, but completed suicides went down 32%. How are we to interpret this seemingly contradictory result? It's not that hard. First, the increase in suicide attempts clearly shows that these drugs can make you want to kill yourself. But if you reach for the bottle of (antidepressant) pills as a way to "end it," you're far less likely to kill yourself than if you reached for a gun (or decided to hang yourself, or jump from a building). And this, indeed, is the explanation offered by the study's authors.

Comforted? Neither am I.

It's not hard to find anecdotal accounts online of people who took an antidepressant and tried to commit suicide. Perhaps the best known recent case was the death of Robin Williams, who was taking Remeron and Seroquel at the time he committed suicide. It's impossible to know for sure if the drugs were causally involved in Williams's death. (He had just started on Seroquel, a week earlier.) But we do know that the relative incidence of self-harm events (across all age groups) is greater following the prescription of SSRIs than following the prescription of tricyclic antidepressants, and this, I think, gets to the key issue. The newer drugs can sometimes (in some people) cause depression symptoms to get worse, and it's not just a phenomenon of "young people."

I'm in the process of finishing an evidence-based book on mental illness; part science, part memoir. Please add your name to the mailing list and check back here for information on how to get free chapters. Thanks so much.