If you've been told by your doctor that antidepressants and antipsychotics take weeks to work, you've been told a myth, and your health care provider clearly either hasn't looked at the actual data for these drugs, or doesn't believe the data.

Alex J. Mitchell, The British Journal of Psychiatry (2006) 188: 105-106, mentions three studies in which effects of antidepressants were measured on short time scales. These were all fairly sizable studies, with 369, 429, or 1,277 patients. In one of the studies, researchers "found that regardless of which antidepressant the patient was taking, there was a measurable early effect on day 1." (Emphasis added.) "By day 3, 20% of patients had shown some improvement, and by day 7 50% had improved. Furthermore, 90% of those who showed any response during the first 3 weeks went on to become full responders. Drug–placebo differences (where apparent) could be detected as early as day 5." In another study, "Patients were requested to complete a self-report mood rating every third day. All patients showed a decrease in depression (and anxiety) within the first 3 days, but with little further improvement in non-responders from days 4 to 6."

The following graph, from Kornstein et al. (2009), shows response data, pooled from four studies, for Lexapro (escitalopram; an SSRI) versus a variety of SNRIs. Patient outcomes were measured using the Montgomery–Åsberg Depression Rating Scale (MADRS). Note the asterisk under the first red square, indicating statistical significance, which occurs at Week 1. 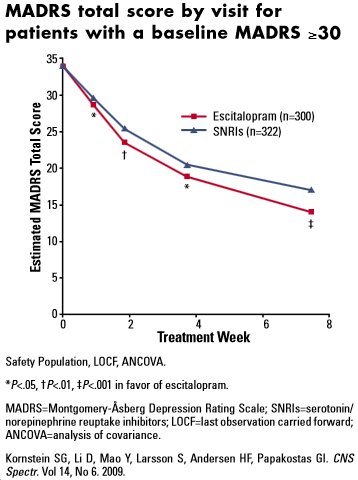 These sorts of graphs are not hard to find and your clinician should be familiar with them. Yet, most psychiatrists and nurse practitioners continue to propagate the myth (and it is just that: a myth) that antidepressants (when they work, which isn't always the case, for all patients) take weeks to show any effect. Certainly, it can take many days for some of these drugs to reach steady-state concentrations in tissues, but the behavioral and mood effects, when they happen, are measurable in as little as one to three days (see Mitchell, referenced above).

The following graph shows that Abilify works for agitation symptoms in as little as 30 minutes (when administered intramuscularly).

This is obviously a different situation than depression, but the point is, behavioral effects don't take weeks to occur with these drugs. (Note: Abilify is approved for irritability in autism, treatment of psychosis in schizophrenia, and treatment of depression in an adjunctive capacity.) Abilify, when given intramuscularly in a hospital setting, begins to have measurable effects on behavior in minutes, even though the drug has an incredibly long half-life (50+ hours, or up to 90+ hours for certain metabolites). Abilify is not unique in this respect. Graphs similar to the one above can be found for other antipsychotics here.

So the next time anybody tells you these drugs take weeks to work, understand that you're dealing with someone who either hasn't read or doesn't believe the literature. The literature says effects happen almost as soon as you start to look for them.

I've written a 115,000-word book on mental illness (which is part memoir, part science); it's in the formatting stage now. Please add your name to the mailing list to be notified when it's ready. Thanks so much.