Could China be sitting on 10,000 tons of gold? (etfdailynews.com)

Seymour Hersh has taken a lot of flak for recent allegations about the bin Laden killing, such as his assertion that Pakistan's ISI was, in fact, keeping bin Laden in a safe house, yet that's exactly what was reported in December 2011 in the Terrorism Monitor Volume: 9 Issue: 47 (and earlier, in a blog by R.J. Hillhouse). And a prominent Pakistani journalist has now (allegedly) identified the walk-in spy who gave up bin Laden. So it's not impossible Hersh's version has a few things right. It would be good, in any case, to see a stronger response from the White House than "there's too many inaccuracies [in the Hersh account] to address one by one." Address them, please. One by one. Meanwhile, Hersh should man up and acknowledge that R.J. Hillhouse broke this story years before he did. (But oh, wait: Hersh doesn't know about blogs...)

Congratulations, Class of 2015: You’re the Most Indebted Ever (blogs.wsj.com). 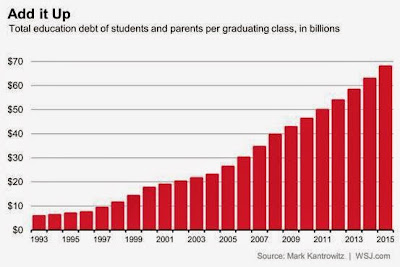 Internet Economics 101: Spotify unable to turn a profit despite revenues of $1 million per employee per year and no manufacturing expense. Spotify's net losses grow to $197 million (theregister.co..uk).

Almost 2 million Americans make less than $2 per day; 7.1 million children live in deep poverty (family income less than half the poverty threshold). Why So Many Americans Are Trapped in ‘Deep Poverty’ (thefiscaltimes.com).

Not exactly news but still startling: The world's 80 richest people are worth more than the bottom 50% of humanity (globalresearch.ca). This is based on Forbes billionaire data, which omits dictators and monarchs. Hence it very likely understates, not overstates, the wealth of the wealthiest.

"There's a reason depression and its precarious cousin, anxiety, are the dominant political modes of late capitalism." An angry population is hard to govern; a depressed population is easy (newstatesman.com).

Join us each Friday for inappropriate news of the absurd. Bookmark this page and no one will get hurt.